Al Schmitt — With the 710 at Capitol Studios 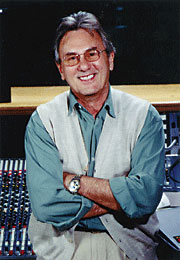 Al Schmitt is one of those New Yorkers who has lived in LA for over 30 years and yet he’s still a New Yorker. It’s not just the accent but also the lively energy. Al Schmitt is a nineteen-time Grammy Award-winning recording engineer and record producer. As a child growing up in New York City, Schmitt would catch the subway on weekends to spend the day at his uncle's recording studio, observing different engineering techniques. At 19, Schmitt began working with Tom Dowd at Apex Studios in New York City. He worked as an independent engineer at Atlantic Records and Prestige Records, and after moving to California, he started working at Radio Recorders.

In the early '60s he moved to RCA in Hollywood as a staff engineer. While at RCA he engineered albums for Henry Mancini, Cal Tjader, Al Hirt, Rosemary Clooney, Liverpool Five, The Astronauts, Sam Cooke ("Bring It on Home to Me," "Cupid," "Another Saturday Night") and Elvis Presley ("G.I. Blues" in 1961). In 1966 Schmitt left RCA and became an independent producer. He produced albums for Jefferson Airplane, Eddie Fisher, Glenn Yarborough, Jackson Browne and Neil Young. In the mid '70s he began spending more time engineering again, recording and mixing artists as diverse as Willy DeVille, Frank Sinatra, Diana Krall, Dr. John, and Barbra Streisand.

During his career, Schmitt has recorded and mixed over 150 Gold and Platinum albums, was inducted into the TEC Hall of Fame in 1997, and received the Grammy Trustees Lifetime Achievement Award in 2006. As a member of The Recording Academy's Los Angeles chapter, Schmitt served several terms on The Recording Academy's National Board of Trustees. I was able to catch up with the very busy Schmitt for a moment to have him try out the new 710 mic pre and have a word or two about Bill Putnam, Sr.

Schmitt moved to Los Angeles in the 1950s, and that means he of course crossed paths with Bill Putnam, Sr. “I met him a few times. I remember we smoked quite a few cigarettes together," Schmitt laughingly recalls. "He tried to hire me, back in the '60s, to go to work at Universal here in California. I was the staff engineer at RCA then.” Well, he didn’t go work for Putnam, but he did get a raise out of RCA.

Still, Schmitt certainly felt Bill Putnam's influence. Putnam’s groundbreaking innovations in recording influenced a great many people in that era. Schmitt recounts, "Bill was absolutely brilliant, he was an innovator. He was certainly one of the best recording engineers of his time. He was fabulous. When he was doing the Patti Page records in Chicago, we were listening to the echo chamber and trying to figure out how we could emulate that. He was definitely the forerunner, and he made great equipment. On top of all that he was a really, really good musical engineer.”

"When [Putnam] was doing the Patti Page records in Chicago, we were listening to the echo chamber and trying to figure out how we could emulate that." 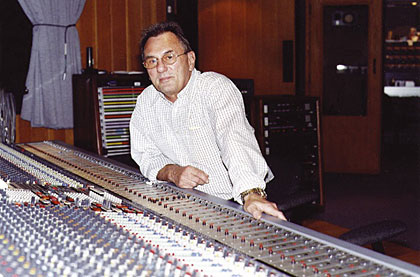 This from a man who works in one of the world’s best recording studios. Capitol's recording studios were designed to minimize noise and vibration, a newly important goal in the high-fidelity-sound era. The studios feature 10-inch-thick concrete exterior walls surrounding a one-inch air gap, surrounding an inner wall that floats on layers of rubber and cork-all in an effort to provide complete sound isolation.

The facility also features echo chambers designed by guitarist and sound expert Les Paul: subterranean concrete bunkers allowing engineers to add real physical reverberation during the recording process. The eight chambers are located 30 feet underground, and are trapezoidal-shaped with 10-inch concrete walls and 12-inch-thick concrete ceilings. The chambers feature speakers on one side and microphones on the other, permitting an echo effect lasting up to five seconds.

Capitol Studios recently faced some sound isolation problems from a proposed construction project next door, igniting fears that the building's legendary acoustical properties would be compromised. The LA music community rallied behind Capitol, and a workable compromise was negotiated that allows loud construction noises between 7 and 10 am. Schmitt was blown away by the community response: “Yes, it's amazing. And we're so pleased with that. This is my favorite place to work. I can work anywhere, and I really enjoy it here. So I would hate to see it go down.”

There are so many things that make Capitol Studios special, and Al Schmitt is one of the them. “Just the history of the room makes this place special. The spirits that are floating around. The spirit of Nat Cole, and Frank Sinatra, and Dean Martin, and Peggy Lee, you name it. Just that alone. People walk in, and walk down the hall, and the first time they're here, you can see, they get goose bumps. It's an amazing place.

"One of things that I like best about it is they have one of the best maintenance crews ever. So everything works all the time. And if something isn't working, it's fixed in minutes. They take it out, put a replacement in. And then they've got like three guys up in the shop working on stuff all the time. All the tube gear is kept in great shape, and all the microphones. I still use the same mike they used on Frank Sinatra and Dean Martin on vocals.”

So it goes without saying that Al Schmitt has experience with the best recording equipment ever made, and all the best mic pres. I eagerly anticipated his opinion on the UA 710. (The 710 Twin-Finity is a new UA preamp design that combines the classic warmth of UA tube design with the transient bite of solid state. It was created specifically to add the tonal versatility and sonic inspiration missing from generic audio interface preamps.)

Schmitt tried the 710 on some instrumental tracking for an upcoming Aretha Franklin Christmas album. “We tried it on a couple of instruments. Harp and English horn. It was really very warm and clear,” he said. "The Blend knob is a great feature. I fiddled with it on the harp and found the sweet spot at about fifty percent. I was really happy with the sound. Harp is a difficult instrument to record, and it sounded terrific. And English horn sounded really good. I think it'd be terrific on vocals. I'd like to try it out."

“I use a lot of Neves and Upstate Audio preamps. I use a Martec a lot.. It was comparable to almost everything I use. It certainly was really, really good--and the price, I guess, is $999 or something? That's pretty damn good. You're going to sell a lot of those to some of the small studios, and the guys who work at home. It's affordable, and it's really, really good. I would recommend it to anybody, it's that good.”