Graham Cochrane is a freelance mixer/producer and the founder of www.TheRecordingRevolution.com, an online education site dedicated to helping musicians and studio owners make better recordings and mixes with simple tips, tricks, and tutorials each and every week.

One of Apollo’s biggest calling cards is its ability to record through UAD plug-ins in real time with virtually no latency. But with the recent updates to the Apollo software and firmware, Universal Audio has included a subtle but powerful new feature called Flex Routing. On the surface it may not seem that big of a deal, but let me show you three cool things you can now do with your Apollo that weren’t possible before.

Use Apollo As Your Live Front-End 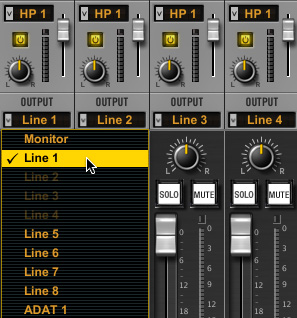 Ex. 1 Choose an output from the dropdown menu.

Wouldn’t it be awesome to run through UAD plug-ins onstage and run the processed signal(s) to the venue's mixer?

With Flex Routing, you can quickly and easily route any of the Apollo’s analog or digital inputs to any of the available line or ADAT outputs. What that means in the real world is you can run your live drums, guitars, bass, vocals, keys, etc, through plug-ins ranging from the Pultec Passive EQ Collection, the classic Teletronix LA-2A Classic Leveler compressor, or the lush EMT 140 Classic Plate Reverberator, and send the processed signals to the house PA.

To do this, you’ll need to route Apollo’s inputs directly to their equivalent outputs, then insert your desired UAD plug-in(s) on that channel’s Console input strip.

By default, Console’s input channels are routed to the monitor outputs only. To route an input to its equivalent output (or output pair, for stereo linked channels), select the output from the channel output menu in Console

(Ex. 1). Then the live input signal can be routed through the UAD plug-ins using the Console inserts. If you don’t want signal to go to the monitor outputs, uncheck the “Mirror to Monitor” option in the channel output menu. 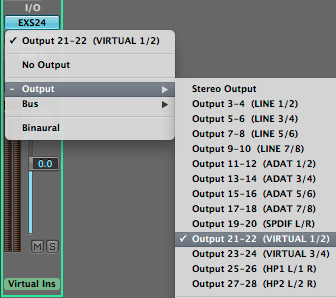 Let’s take the live approach a step further. Many solo artists or bands run backing tracks and Virtual Instruments (VIs) out of their notebook’s DAW. The Apollo and Flex Routing are perfect for facilitating this. With the power of Flex Routing and its Virtual I/O, you can easily play virtual instruments from the DAW through UAD plug-ins in realtime and mix them independently with the backing tracks at the front of house.To do this, all you need to do is route the software output of the VI from the DAW to one of Apollo's virtual (software) inputs using Virtual I/O. This makes the VI appear in a virtual input channel of Apollo's Console mixer (Ex. 2).

Ex. 3 Send the backing tracks and the VI separately to the house PA.

Then, any UAD plug-in can be applied to the VI channel in Console. To mix the VI and the backing tracks independently, simply route the VI to a separate hardware output of Apollo (instead of the monitor outputs) — again using the Output menu of the Console's VI channel. Then send Apollo’s monitor outputs (which contains the main DAW output / backing tracks) and the line outputs (which contains the UAD-processed VI) to the PA where they can be independently mixed (Ex. 3).

Setting Up Apollo As Your Pro Tools HDX Front End

Want to record through UAD Powered Plug-Ins in real time but you’re not sure how because you use an Avid interface? For Pro Tools HDX users, the Apollo can actually be a huge asset to your already existing setup, all thanks to Flex Routing. 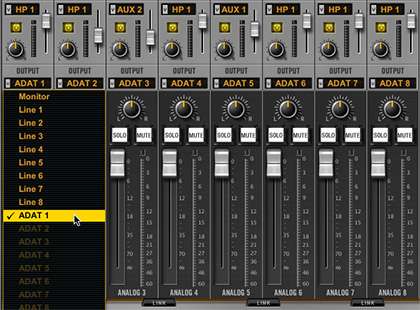 Ex. 4 Route an analog input to its corresponding ADAT output.

Simply treat Apollo as a converter and run your analog inputs into the Apollo, process them with UAD plug-ins using Console, and route the inputs to Apollo’s ADAT outputs. Just route each analog input to its corresponding ADAT output via the Output Menu in Console; then you can quickly and easily send those tracks via lightpipe from Apollo into your existing Pro Tools interface. (Ex. 4).

With the addition of Flex Routing, Apollo has turned into a Swiss army knife of sorts, allowing you to take advantage of the great converters, sonic firepower, and award-winning UAD Powered Plug-Ins in all sorts of new situations — both in studio and onstage.