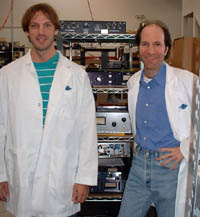 Editor’s Note: This article was originally featured in a previous edition of our Webzine. It has been selected for reprint because of the ongoing relevance of the hardware units and their availability as UAD Powered Plug-Ins.

Q: What is it about the 1176LN and LA-2A compressors that makes them distinctive sounding? How can these distinctive properties be captured in a digital emulation?

A: To answer that, let’s give a brief overview of what compression is, and then focus on the special properties of these two compressors that give them their unique flavors.

Compression is strictly defined as the utilization of automatic gain control to reduce the dynamic range of a signal. Any automatic gain control device can be broken into two logical components: a detector, which forms an estimate of the amplitude or power present in the input or output signal of the device, and a gain computer, which computes and applies an appropriate gain to the input signal. Compression has many different applications, and, as a result, many different methods of signal detection and gain computation have been developed. It is not surprising that the sonic character of a given compressor is heavily dependent on the precise behavior of its detector and gain computer. Because of this fact, we have taken great care in the design of our compressor emulations to develop accurate models of the products we emulate. This is a brief overview of some of the more important details of the compression process as they relate to those models.

Among the most useful features of the 1176LN is its ability to attack quickly — as fast as 20uS. One of the things that helped the 1176 to achieve this fast attack was the fact that the 1176 is a feedback compressor, which means that the signal detector operates on the output signal rather than the input signal. This feature of the 1176 provided a difficult challenge for our digital emulation, because at a sampling rate of 44.1 kHz, 20uS is less than one sample period. [Editors Note: Check the specs on other manufacturers' recent 1176 'emulations'; it looks like they've still got a ways to go to get their attack times right.] Figure 1 shows a test signal that was used to observe the attack behavior of our compressors. It is a sine wave whose gain is increased by 20 dB at a positive-going zero-crossing. Figure 2 shows the response of a Universal Audio 1176LN re-issue (blue), an original UREI 1176LN (red), and the Universal Audio 1176LN digital emulation (black) to the signal. As can be seen, the digital emulation has an attack that is as fast as the hardware compressors at 20uS. All compressors were set to the fastest possible attack and release times and a ratio of 4:1, with the input gain set such that the small part of the signal was at the threshold of compression. 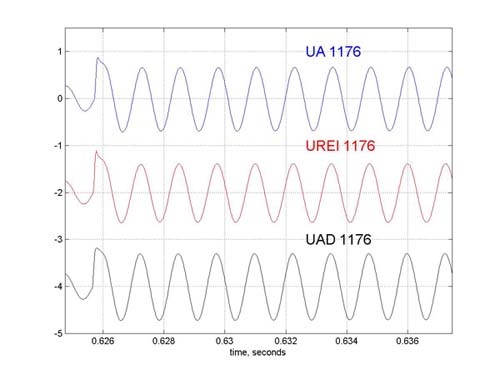 Program-dependent release is a feature of many popular compressors. The motivation for having program-dependent release is as follows: After a transient, it is desirable to have a fast release to avoid prolonged dropouts. However, while in a continued state of heavy compression, it is better to have a longer release time to reduce the pumping and harmonic distortion caused by repetitive attack-release cycles. It is a little-known fact that the 1176LN compressor employs a release mechanism that is heavily program dependent. 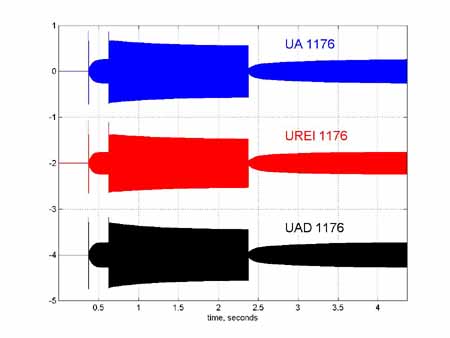 Figure 4 shows the response of the 1176LN compressors to the signal. Again we show a UA re-issue 1176LN (blue), an original UREI 1176LN (red), and the UA 1176LN digital emulation (black). As can be seen from the plot, the release period centered around 0.5 seconds is markedly faster than the release at 2.5 seconds, where the prolonged period of compression has caused the release time to become longer. All compressors were set to the same settings as those shown in Figure 2. Figures 5 and 6 show expanded views of the release envelopes in Figure 4. 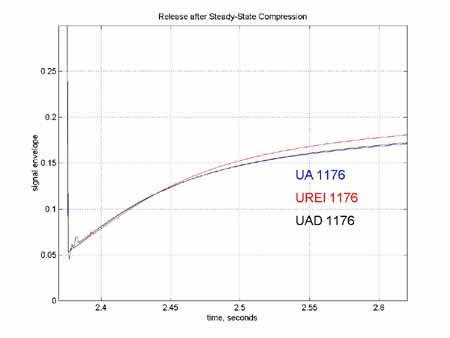 Creating a digitized model of a compressor requires two steps. First, an understanding of how the compressor behaves is needed. This is usually developed by reading schematics and then running specific tests on a unit once the mechanisms of operation are understood. For each compressor modeled, a separate suite of tests is required to expose all of the important facets of the compressor’s behavior. Once the behavior is understood, an algorithm for duplicating that behavior in the digital domain must be developed. This step can take on varying degrees of difficulty, depending on the rates at which different processes happen within the analog circuits being modeled, and the degree of nonlinearity involved.

In general, the character of any compressor will depend heavily on both its signal detector and its gain computer. In order to make an accurate model, we need to characterize the behavior of both these elements. Other features that need to be modeled include EQ and nonlinearities in the signal path due to transformers, blocking caps, limited-bandwidth amplification stages, et cetera.

Because of the many dimensions of behavior a compressor can exhibit, there is no cookie-cutter approach to modeling of analog compressors. Each unit must be studied separately, and a separate model constructed. Because of inherent nonlinearities associated with compression, there is no way to guarantee faithful behavior by signal modeling, or studying input/output behavior. Only modeling of the physical processes happening within a given unit will result in a robust digital model.