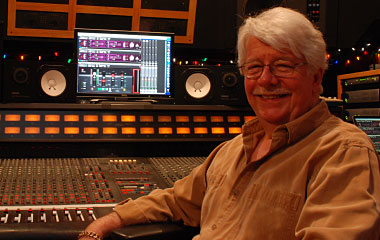 Ken Scott recorded and mixed some of my favorite David Bowie albums and the Beatles’ White Album, so I was a bit nervous about having dinner with this legendary engineer. But he quickly put me at ease with his charm and humor. Scott had his start in the ‘60s working as a tape op at Abbey Road Studios and from there went on to engineer and produce timeless songs, such as "I Am The Walrus," "Rocket Man," "Ziggy Stardust," "Walk on the Wild Side," and many others. One of the unique aspects of Ken’s career in music is the diversity of iconic styles he has been a part of, from the ‘60s to today.

Scott keeps busy these days with EpiK DrumS–A Ken Scott Collection, a virtual drum and groove instrument from Sonic Reality in which Scott recorded and mixed samples by his favorite drummers: Bill Cobham (Mahavishnu Orchestra), Terry Bozzio (Missing Persons), Woody Woodmansey (Bowie’s Spiders from Mars), Bob Siebenberg (Supertramp) and Rod Morgenstein (Dixie Dregs). This collection is so large that it comes on a hard drive. Scott also happens to be a connoisseur of and involved in the development of the Trident A-Range consoles, so I was eager to hear his feedback on the UAD Trident A-Range EQ plug-in.

Why did you decide to do the EpiK DrumS project, and what is the philosophy behind it?

I started the EpiK DrumS project because I was being asked more and more about how'd you get this drum sound, how'd you get that drum sound. These days, it's becoming harder and harder to get those, because the equipment, be it mics, be it drums, be it the mixing consoles, are much harder to find than they used to be.

So I contacted five of the drummers that I worked with successfully in the past, and that covered that full-spectrum of sounds and feel. And once they'd agreed, I then found studios that had Trident A-Range boards, because at one point or another, I used a Trident A-Range board with every one of these drummers. So that was the logical desk to use.

Then it was trying to match up the studio that had the A-Range with the acoustics of the room that we originally recorded in. Then it was finding the mics. That was easy--costly [laughs], but we found them. And then it was on to the drums themselves. Some were easy. Terry Bozzio, one of the drummers, he still had basically the original kit that we used back in the early '80s when I recorded him with Missing Persons.

Some of the others, like for Bill Cobham, were really hard to find, because he used Plexiglas Fibes drums, who are now out of business, and it was very hard, because he used so many toms back then. It was hard finding a complete kit of Fibes acrylic drums for him. But we managed to patch something together, most of which is Fibes. A couple of others we had to throw in, but they matched up perfectly. 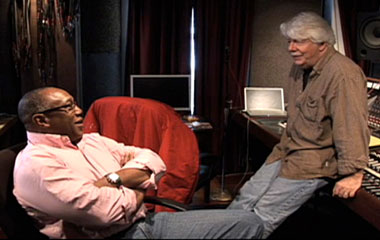 I started off having them play along with the records that I'd done with them, to match up the sounds. Once I was happy with that, we just had them play the ` grooves from the records. Then once we'd got those, it was, "OK guys, now play whatever you want to." And that's what they did.

What is your history with the Trident A-Range? Weren’t you involved in the development?

Yeah. I started work at Trident Studios back in 1969. We originally were working with Sound Techniques boards, and then the owners of Trident, Norman and Barry Sheffield, decided they wanted to manufacture their own boards.

They enlisted the help of Malcolm Toft, who was the studio manager at Trident at that time, and was a bit of an electronics whiz, so it made perfect sense to get him to do the basic design work. They then came to the three engineers at Trident at that point--there was Robin Geoffrey Cable, Roy Thomas Baker, and myself—and asked, "OK, what do you want on the board?"

So we sat down, came up with a list of what would suit the three of us, gave it to them. A couple of months later, Malcolm would come up with a module and say, "OK, what do you think of this?" We’d try it out on various sessions, and would get back to them with "We like this part of it, we don't like that, change it" kind of thing, until we came up with the Trident A-Range board. He came up with it electronically; we came up with what we wanted to hear out of it, and ease of use.

"The Universal Audio Trident A-Range plug-in, for me, it's one of the warmest EQs that I've found within plug-ins. It covers what we were looking for when the desk was originally designed … I think it works as closely as possible to the original A-Range that you can do within a computer."

What is it about the sound? What is it that you like about these consoles?

My history is that I came from Abbey Road Studios, which at the time was called EMI Recording Studios. Everything back then, it was all valve [tube], which to me has a much warmer sound.

The first EMI desk that they brought in, the TG, none of us liked it, because it was a lot harsher. It was the first solid-state desk that we worked on there. We all got great sounds out of it, eventually, but none of us particularly liked it as much as the old EMI stuff.

Then I moved on to Trident, and the Sound Technique board was slightly warmer, but then the Trident A-Range came in. I think all of us wanted to try and get a bit closer to the tube sound, and get a much warmer sound, less harsh EQ. To my ears, and obviously the other two engineers at the time, we felt that it was a much warmer sound.

In England at that time, there were two basic manufacturers of desks. It was the Trident A-Range or the Neve. You liked either one or the other, and as I was part of the A-Range team, I obviously preferred that one. There was a coldness for me, with the Neves back then, that I didn't like. And the Trident A Range covered what I was looking for. 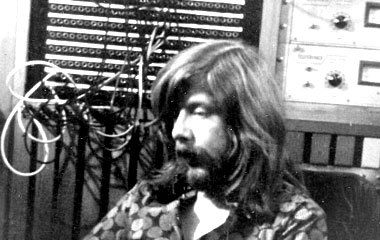 Ken Scott in the early days at Trident with some LA-2As. Nice!
What is your take on the Universal Audio plug-in?

The Universal Audio Trident A-Range plug-in, for me, it's one of the warmest EQs that I've found within plug-ins. It covers what we were looking for when the desk was originally designed. That changeover from tube to solid-state kind of thing.

To me, the new plug-in has that same kind of difference compared to a lot of the other plug-in EQs I've used in the past. It's much warmer, the EQ is much smoother, to me. I think it works as closely as possible to the original A-Range that you can do within a computer.

If I'm not using an outside mixing console of some kind, then I will certainly be using the Trident A-Range EQ for everything I do within the computer.

Have you tried any of the other UA plugs?

I have discovered through the Universal Audio plug-ins, the EMT 140 Plate Reverb, I love that. I also love the EMT 250—their first digital reverb. I've used that a bit, and it's one of the best reverbs I've found on computer.

And what’s next for Ken Scott?

So the next thing that we will be doing will be all basses. And once again, it will be a similar situation, where it will be six bass players that I've worked with in the past very successfully, and recreating their sounds as well. So I know that I will be using the A-Range plug-in for some of that!