What is the secret behind the distinctive sound of British rock in the 1960s and ‘70s? Is there really even a distinctive "British" sound? 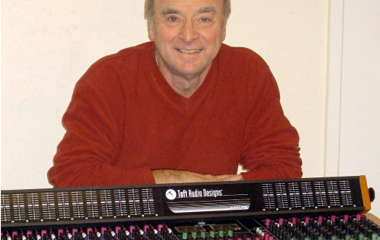 Original Trident designer Malcolm Toft
with one of his latest creations

My quest for answers unearthed many theories. Some people believe that it’s all about the gear that was used; others suggest that it was about the powerful combination of cultural forces and new technologies, and even new ways of using old technology. Specifically, some claim that it was the particular EQs being used, or even the specific transformers. Still others claim it was about the division of labor in UK recording studios. Whatever it is, I love the records produced in that era, and further digging revealed that many of my favorites — Queen, T-Rex, Bowie, Elton John — were made on Trident consoles.

I recently had the opportunity to speak with Malcolm Toft, the original designer behind the Trident console, and pose the question to him.

That's an interesting question. I think there is definitely a distinction. I traveled a lot, in the early '70s in particular, because Trident became very popular in America, and I think there is a distinctly different way that the English and the Americans did things. I think there were a number of contributing factors. I don't think our Brit acoustic designers thought the same way as maybe the Americans did. You have the Tom Hidley’s in those days, and these kind of guys, and they designed in a particular way, with all the rock on the wall, and the wood paneling and everything else. Whereas we tended to be just different, I think. We were different in the whole way that we approached things. Our rooms sounded different, the way we designed things was definitely different. I think it was the approach that the engineers had.

There's definitely a British sound and an American sound. I think it was the differences in the music, as well. We had different types of music in the UK. We had the Who and the Stones, and some quite aggressive sort of rock, whereas the '70s LA rock tended to be little bit more mellow, with Chicago, and Bread and these kinds of bands, and of course you have the Carpenters. So there was a difference, I think, from both sides of the Atlantic, to do with music, to do with the producers, to do with the engineers, to do with the studios.

In the end, we kind of ended up winning the Americans over really. Because, I think, of the Beatles, and some of the stuff that was coming out of England. It was such a strong force, that I think a lot of American producers and engineers kind of said, "Oh, what are these Brits doing? How are they getting that sound?" And I think that sort of gave the lie to the British sound. Does that make sense?

What about technology being part of that sound?

In those days—don't forget, there still are, in fact, a lot of English desk manufacturers—there were probably more English desk manufacturers in those days than there were American. I seem to remember in the early '70s there were in America API, of course, there was Quad-8, Spectra Sonics were making consoles. There were a few out there. But we had far more. We had Raindirk, we had Cadac, we had Trident, we had Neve, Sound Techniques, Soundcraft, Amek, Allen & Heath. There were a lot more British manufacturers of consoles, so again, I suppose our consoles found their way over there. There weren't many American consoles that came across to the UK, in those days. I can only recall actually a few—one or two—API consoles, in London, and that was it. All the consoles were British made.

So the technology was very much British led, and of course Neve became such a big player. Then Solid State Logic, all British companies. So we tended, for many, many years, to dominate the console market. So there was this British sound, I think, because we had a British way of doing things. A European way of approaching circuit design, and the way that we actually did it. And it had an English slant to it. So I think just by sheer numbers, in a way, we did create a British sound. 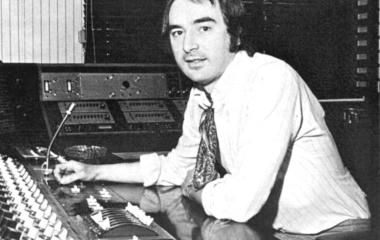 Malcolm Toft in the earlier days of Trident Studios

What do you think the Trident sound is?

The Trident sound—I think we were quite unique, and it's been documented on many occasions that we were very unusual. I was a recording engineer, that's how I started off my life, and then got into designing consoles. I don't know of many other companies that started in that way. They were mostly founded by design engineers, predominantly. Rupert Neve will admit that he was a designer. He had done very little in the way of recording. We were a bunch of enthusiastic recording engineers who got into designing consoles really by default.

I think what gives a signature sound to the Trident console is the fact that we very much designed with our ears. Because we were recording engineers, we had an idea of the sound we were trying to achieve, and I remember in the early days we did an awful lot of listening tests, and rejected things, not because of technical inadequacies, or technical problems, but merely because we didn't like the sound, whatever that might be.

We would literally tinker empirically with the EQ, and with the sound of the console, until it sounded right to our ears. And then we would look at actually what it was doing on oscilloscopes, and technical meters. And we didn't have a lot of meters in those days, anyway.

Trident in particular definitely had its own sound that was because of the people behind the company. Neve came from more of a broadcast background, so they had a very clean sound, but again, a musical sound, because they had the input of people like Geoff Emerick at Abbey Road, and many other top engineers, who, in their way, put their footprint, if you like, or imprint, on the Neve sound.

That’s much like Bill Putnam, Sr., because he was a recording engineer first, and ended up making his own gear.

Exactly. Because he couldn't get from anybody else what he wanted. He couldn't get a compressor, or whatever, from anybody else. He had his particular ideas of the way that he wanted to do it, so Bill designed his own console, exactly the same way we did at Trident. We did not consciously go into designing and building consoles. We went in to building the A-range console because we simply, at that time, could not get what we wanted from anybody else. We were virtually forced to design our own console, or else we had to accept second best—which we weren't prepared to do. So that's very much how Trident came about, by the fact that we designed a recording console that we wanted, that fulfilled our needs.

And of course then I realized, hey, wait a minute, we've got a little input channel here. And then I think I was about the first person to use the monitor channel as another line input on mixdown, so effectively almost doubling the number of channels you had on the desk.

So we did a lot of innovative and groundbreaking stuff back in those days. We just didn't realize the impact that a lot of the stuff would have and how it has carried over.