Matt Boudreau Mixing With the UAD-2 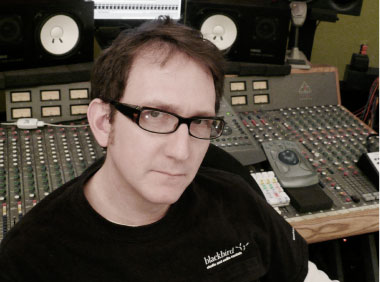 I know — we interviewed Matt Boudreau back in March about his racks of UA outboard gear and four UAD-1 cards. Could Matt still be wowed? We asked him to try the UAD-2 to track and mix a song in two days and let us document the process on video. Matt’s partner, Michael Romanowski, then mastered the track using a UAD-2 with the mastering application Soundblade.

So Matt, how did this project happen?

Universal Audio asked producer Mike Winger and myself to come up with a band that we thought could showcase the power of the UAD-2, as well as the sound of their preamps. We put our heads together, and Mike suggested the band Cannons and Clouds. He had been working with them, and we thought that cutting them live in Broken Radio would be a great way to do that. We wanted a band that was up and coming, that we thought would appeal to a lot of people, and would be a good test case for the UAD-2 and the 710 preamps.

The day of the shoot we got there real early — well, early for us [laughs] — about 8 o'clock, to set up. As the band started showing up, we got everybody in place. We tracked three songs, with multiple takes. We were cutting it live, knowing that we were going to redo the vocals because the bleed on the vocal tracks was too intense. They are a five-piece band. Two guitars, bass, drums, and harp. The lead singer, Zach Blizzard — and yes, that's his real name, Zach Blizzard — plays guitar. Brittany Brunken plays harp and sings, and Steven, the drummer, also sings. So we thought, let's cut the band, let Zack and Brittany do some scratch vocals live, and then we'll do some passes of vocals with them in a trio formation. We spent the first day doing that, and finally decided what we thought would be "the song," and the right take. We really didn't waste a lot of time. We jumped right into the vocals, had them overdub the vocals in two passes.

Did you layer the vocals in the final mix?

Yes. What you ultimately hear is two sets of vocals from each person. There's such consistency there from take to take that it's not readily obvious. The next day, we had even less time. We had to have the thing mixed by three o'clock, and have it over to mastering after that. There was no AutoTune on the vocals; there was no cutting and pasting of performances. We relied on the performances of the band, so you'll hear the tension and the fluctuation of the tempo a bit. I love that. I love the realism of that. It feels good to me; it doesn't feel like it's cut through a grid.

I understand that you switched to Cubase for this project, in order to use the UAD-2. Were you apprehensive about using Cubase?

No, not at all. I actually had started playing with Cubase a few weeks earlier, because I did some tests with another record I was working on, and to my surprise, found that the summing bus in Cubase just sounded better than Pro Tools. It was smoother in the top end. And I've been using Pro Tools for over ten years. That's why we tracked in it, because I'm more comfortable tracking in Pro Tools. So going over to Cubase for this was not an experiment, it was just a decision based on sound. It sounded better. It sounded smoother, more open .

What outboard gear did you use while you were tracking?

Since UA asked us to work on this, we decided it would be a good time to use all UA equipment. So we used all UA preamps, the 4110s, the 2108s, the 2-610s, the new 710 Twin Finitys. The drums were almost completely 2108s. Being a drummer, there's a sound that I'm expecting to hear back from the drum kit. The 2108s are really the sound that I'm looking for. They're very forward, they're immediate, capture the transients really nicely. Whereas the 2-610s aren't as fast. They’re a little bit smoother, so I like to use those on guitars. Although on the kicks and the snares, we did use the 4110s. We had two kick mikes and two snare mikes, and we ended up using the 4110s on that, because you can shape the sound a little more, with the Shape knob, changing transformers.

For the vocals, harp, and I think Louie's guitar, we used the Twin Finity. And I'll be honest with you, I didn't, in my head, say “All right, well, Louie's guitar has to sound like this.” I would just turn the Blend knob on the 710 until you hit that magic point where you think, "Ah, that's what I think this should be like."

Let's go into the mix. You were using a UAD-2 QUAD card?

How did it compare to your four UAD-1s that you've been using from a chassis in the past?

Well, the bottom line is, it's got so much more power it's ridiculous. It's got more power than one could — well, I'm sure there are some people out there that could utilize all of its power, but I could see one Quad card — or especially two Quad cards would be just a silly amount of power to possess in a DAW. It allowed me to use whatever plug-in I want, whenever I wanted, whereas with my UAD-1 setup, I had to cherry pick which instruments were going to get the more CPU-intensive plug-ins — like the Neve stuff, or the reverbs. But with the UAD-2, I could just say, I want to use the Helios here, the 1081 there, the 1073 there. It allowed me to, without consideration, use whatever plug-in I wanted, whenever I wanted, wherever I wanted, however much I wanted, to make the mix that I felt best represented what we were doing.

What the UAD-2 enabled me to do was use what I think are some of the best-sounding plug-ins on the market, to a level that I hadn't been able to before. The UAD-1 is a fantastic product, but you put four of those in a machine, in whatever configuration, and it's great, but you're going to bump up against the ceiling. Whereas in this situation, I kept throwing plug-in after plug-in after plug-in, and the thing just wouldn't quit. And finally, I reached the end of my mix thinking, "OK, this is it. There's nothing more to put on here." And I had barely tapped it; I had just barely jumped over the 50-percent mark on the card. So when I got to the end of the mix, it occurred to me, wow, I could have shaped this in an entirely different way. I could have given every channel a Neve 88RS, and it would have been like sending the whole mix through that board, in the virtual world. It opens up too many possibilities, which I think are going to please a lot of people. This kind of power has not been available before.

Did it help you to be more creative?

Oh yeah. For example, pulling up the SPL Transient Designer, to save the snare-drum sound. Because of the time crunch of doing this tracking, I wasn't able to spend the first half of the day experimenting with snare drums and snare mics. We just set the drummer up, took a listen to the kit, said "OK, let's put these mics on the kit." I think what I overlooked at one point in the day is that I wasn't getting the snare-drum sound that I ideally would have liked, and rather than saving what we had, in my old system I would have had to drop in a snare sample to make it work. But in this setup, I had so much DSP power available to me, I was able to put the Transient Designer on, just as an afterthought. That normally takes up a lot of DSP, and probably with my previous setup it probably would have run us up against the ceiling of the DSP power. But here, we had so much leftover power, it was like, oh, yeah, just pop that on there, and crank the attack, knock the sustain down, and we'll have the snare-drum sound we needed. Sure enough, that was the case. So the older cards, while very powerful, are nothing near the power of this thing!

How do the UAD-2 and the UAD-1e work together? Was it pretty transparent?

Oh, yeah. Stopping to take an air break, I took a look at the CPU usage meter for the UA cards and realized there were four plug-ins that were being routed over to the UAD-1, and I had no idea. It's a seamless process. I had no idea it was going on. Of course, that process will be eliminated at some point, but for the transition, it's a great feature to have, because there's a lot of UAD-1 and UAD-1e users out there.

I heard you were surprised that it's all made in the United States.

Yeah. In talking with Matt Ward [UA President] about the products, I asked him what percentage of Universal Audio products are made overseas, and to my complete and utter shock, NONE of it is! Maybe bits and pieces, maybe a chip, or a resistor, or a circuit come from another country, but it's all made here in the U.S. In this day and age, where everything is cheaply made overseas, that's a welcome surprise. That makes me want to support the company even more, because, hey, this is a company that's supporting the U.S. economy directly by supporting U.S. workers. Now, that's not the primary reason I buy an audio product, but it sure is a hell of an incentive to do so.

Are you looking forward to trying the new upcoming plugs?

I really have my sights set on the Harrison and the Empirical Labs stuff. All the new vendors that are signing up to be on board with UA are what I'm looking forward to hearing. The Moog filter is going to be something to play around with that will definitely bring some more flavor to a mix.

Was it fun to be involved in the launch of the product?

Absolutely. It was an honor to be involved in it, because it's something that I honestly believe in, and will use. It nice to be involved with a small, U.S. company that makes a great product, and is backed by really good people. A group of people who are making products that we all can use, that make sense for where we're at — they're not trying to sell us some random garbage. They're creating products that — well, that obviously need to make money — but they're making products that the average guy, whether you're a top-flight mixer or somebody in their bedroom, can definitely make great use of, and help make their work better.