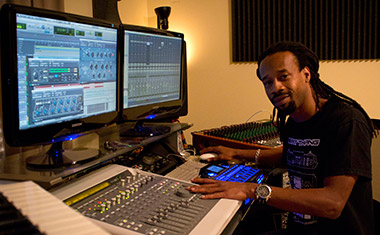 In partnership with Soulbeat Productions and BKE, Rev co-created the Beat Thang mobile music workstation, which is available worldwide as a hardware device or virtual instrument. Loaded with over 3,000 professionally-mastered sounds, a sampler with waveform editing, built-in effects, chromatic keypads, and a portable design, the Beat Thang  provides all the tools needed to make high-quality, radio-ready music right out of the box.

To date, the Beat Thang can be heard on a myriad of high profile projects recorded by acclaimed artists such as Michael Jackson, Will.i.am, Chris Brown, Public Enemy, and Alice Cooper. To reach his vision of creating a professional hip-hop, pop, and electro-influenced sound library for the Beat Thang, Rev turned to his arsenal of UAD Powered Plug-Ins to create much of the punch, warmth, and sonic depth.

Anatomy Of A Great Sound

There are several steps to making truly unique sounds. Of course it starts with the sound source, mic selection, mic technique, and environment, but it all comes together and ends with the preamp, processor selection, and settings. This is the final stage where you can make or break a well-recorded sound with the right or wrong choices. I've found UAD Powered Plug-Ins to be the perfect choice for finalizing my sound — either as a mix engineer or a sound designer.

I started using the UAD-1 when we first began to do the stock sounds for Beat Thang and I was like, "Oh my God!" My most favorite vintage processors as plug-ins and powered by external DSP! I had to get the UAD-2 as soon as it came out and now my A and B rooms are fully equipped with UAD-2 plug-ins. The sound is absolutely awesome and the modeling is spot-on for each processor. Now instead of running to a rental spot or trying to track down a friend with an LA-2A, for example, I just pull up a plug-in. And because it's a digital model of a prime specimen, I get the consistency and perfection of digital replication, along with the warmth and character of the original analog gear. I really feel that I now have the tools to get out the stuff I hear in my head. 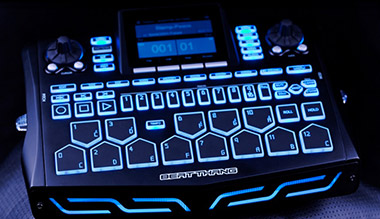 We cut tons of stuff for the Beat Thang and probably only used about 10% of it on the stock sound set. The idea was that we'd go back to these raw sessions and mine more gems for expansion packs — people always want new sounds. A big part of that was just calling in four or five session players and jamming for a few hours. The result was a really long session that could be chopped up and used for its individual elements (bass riffs, sax riffs, drums, etc.). The user could put any combination of the elements together or use any one element separately. These can be sold as construction kits for production, or as sample-style stereo loops. Below is a loop that will be offered on an upcoming Beat Thang expansion pack. We'll chop it into individual movements for the final product.

Listen to the difference before UAD plug-ins were used, and after:

Already, it's a well-recorded jam with several potential loops to cut, but the UAD plug-ins take it to the next level. I tracked a cajon, bass, and sax and bounced them all down to a stereo file. It's processed to sound like a hi-fi version of an old record, so I even added a little vinyl noise. This way the user gets what sounds like a vintage loop, but it's royalty free.

Before the bounce, I processed the individual elements. Here's how:

For the hole mic on the cajon, I used the UAD Harrison 32C Channel EQ Plug-In. It's become my "go to" for EQ lately. I just really like the Q settings and it's easy for me to pop out a frequency by sweeping it. I love it on upper mid range and top end too. On this track, I added 2 dB at 55 Hz to make the lows more aggressive, and some moderate limiting with the Precision Limiter Plug-In so it's more dominant in the mix. The Harrison 32C's lo-pass filter was also used to soften up the vinyl crackle — I just rolled it off at 8 kHz. Now it sounds like it came off an old piece of wax.

I put a stereo mic on the room too. And then I bussed that as well as the hole mic to a stereo aux. On that aux I used a Neve 88RS Channel Strip and the Precision Limiter again. That Neve warmth is captured meticulously, and all it took was 3.5 dB at 1.6 kHz to make the cajon's upper mid tone snap. I fattened it up with about 5 dB of Neve 88RS compression. I pushed the whole aux input till I got a fair amount of limiting and squashed the transients quite a bit too. The result was a very fat, in your face drum sound!

To bring out the tone of the sax I used, guess what ... the Harrison 32C EQ. I added 2 dB at about 2.6 kHz and did a hi-pass at .25 kHz. You might as well say I mixed this whole thing on a Harrison console. And that's the cool thing about these plugs. If you want a "Neve mix," then do all Neve strips — or Harrison, SSL, whatever board you want to sit behind. I wanted this track to be "vintagey" too, so I used the Teletronix LA-2A Classic Leveling Amplifier Plug-In to squash the dynamics a tiny bit and get some of that classic LA-2A sound. I set it so that I only got about 1 dB of gain reduction, and made up the gain. The Precision Limiter was set to tame the transients down by about 4.5 dB.

For ambience, I used the RealVerb Pro Custom Room Modeler Plug-In. I felt like the sax needed to live in a bigger room than it was actually recorded in. Usually, I really enjoy designing rooms in RealVerb right down to the surfaces and building materials, but for this task the "big snare" preset worked just fine. I just dialed in the wet until it was the way that I wanted it to sound. 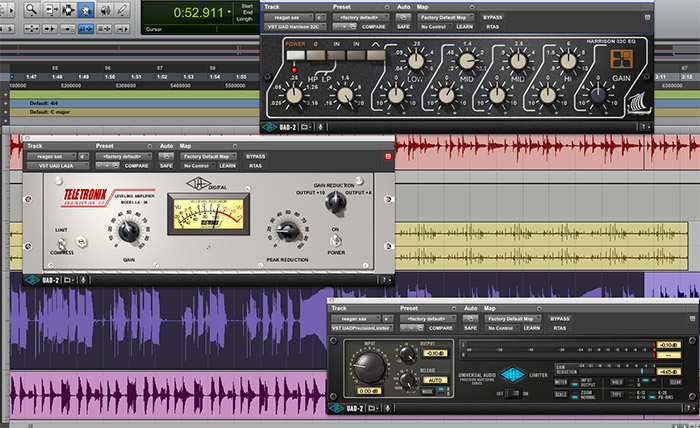 The bass was tracked via direct input. It had a nice natural tone already but needed a little beefing up. So, I added three UAD-2 plug-ins on that track. For the top end I used my old friend the Harrison 32C EQ again. I added 2 dB at 1.4 kHz to bring out the tone, and about 1.8 dB at 6 kHz to bring out the top end stringy sound. Even though I use it mostly on vocals, it really shines on applications like this.

I also fattened it up by using a Neve 33609 Compressor Plug-In. A 0 threshold and 15:1 ratio produced about 4 dB of gain reduction. That was matched with the same amount of make-up gain, and last in the chain was the Precision Limiter again. It was set for 3 dB of reduction just to tame the transients.

On the Main Stereo Bus I used a combo that I typically use for quick mastering. First, I run the whole mix through a Pultec Pro EQ — this thing acts just like the real deal. When I used the actual hardware back in the day, I would sometimes just plug it in the chain and run it flat just to get the sound that the tubes and signal path delivered. I've been pleasantly surprised to see that the same is true with the UA modeling. I did no adjustments to the Pultec Pro EQ, I just plugged it into the main bus flat and got an enhanced top end, wider stereo image, and really nice subharmonics on the low end. The Pultec Pro is a great device for stereo mastering "gloss." The Precision Limiter was last in the chain and was set to deliver about 3 dB of overall gain for loudness and stereo mix "glue." This was the finishing touch that made this mix seem finalized and really pop out aggressively as a final master.

So, there you have it. Here’s the final mix again, complete with UAD processing: