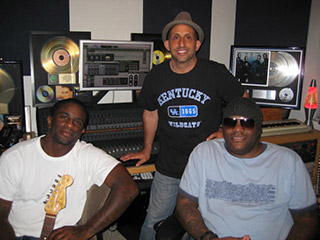 Tim Kelley and Bob Robinson (aka Funktwons) are a Grammy Award-winning hip-hop and R&B production duo. Together with their longtime engineer Andy Haller, they have worked with some of the biggest artists in the music industry, including Michael Jackson, Ludacris, Dr. Dre, Nas, Usher, and Beyonce.

The goal for this session was to get that old school vintage R&B sound but with a modern feel. First, let’s take a listen to the song. If you can, listen on studio reference monitors or headphones so you can hear all the nuances in the recording.

Getting the Drums Right

Most of the drums sounds you hear in our mixes were processed with UAD Powered Plug-Ins. We used the LA-2A Classic Leveler to give Tim’s kick samples a little rounded punch and to tighten up the bottom end to lock in with the bass. It added some upper harmonic distortion which was a nice bonus as well.

Settings for the Teletronix LA-2A Classic Leveler Plug-In on drums.

After that I used the Neve 1081 Classic Console EQ Plug-In. I gave the kick a little bump at about 200 Hz and a dip at 390 Hz for a fat roundness that won’t get in the way of the bass.

Settings for the Neve 1081 Classic Console EQ Plug-In on drums.

Take a listen to the kick before UAD Plug-Ins:

And here’s the kick after UAD Plug-Ins. Again, make sure to listen to these sound examples on studio headphones or monitors so you can really hear the effect:

As for the claps, we used the dbx® 160 Compressor / Limiter Plug-In. I didn’t want to squash it too much — just enough to where the peak of the transient is pulled back 1 or 2 dB. The threshold was about 2 o’clock and the compression was set to about 2 or 3.

For drum ambience, I used a combo of different reverbs to create a depth of field. My favorites for this task are the EMT 250 Electronic Reverb and the EMT 140 Plate Reverb. I set the EMT 250 to about 1 to 2 seconds with no pre-delay to add a bit of body and extend the drum tone.

Needless to say, the background vocals really needed to be transparent and crystal clear. I’m a big fan of subtractive EQing. To me, it’s more logical to remove extraneous frequencies before boosting anything that can cause phase shift (I learned that from Ed Cherney). I started out by filtering out low room/unwanted rumble at about 50 to 60 Hz with a moderate slope. Then I pulled out anywhere from 300 to 450 Hz on each individual track where needed and added a bump of 1 or 2 dBs of 8 kHz.

As for compression, the 1176 Classic Limiter really made the background vocals sit nicely while retaining their dynamics and adding a bit of top sparkle that minimizes EQing. I started with the stock settings, which are pretty good, then played with the attack and release time so it was more in time with the tempo of the tune. Those tracks were then bussed to an Aux that had the Precision EQ Plug-In.

Settings for the 1176 Classic Limiter for background vocals.

I also used the Precision De-Esser Plug-In at the end of the subgroup to tame any extra sibilance. I usually start at 5 or 6 kHz and play with the threshold until it smoothes out the "Ess" but still sounds natural.

Settings for the Precision De-Esser Plug-In for background vocals.

The result is subtle, but effective. Here's the hook before UAD Plug-Ins:

For the low-end bass, most of the time the processing is minimal. I usually add a little EQ and little limiting with the LA-2A — just enough to pull it back a couple dB. We used the Neve 1081 to add a touch of bass around 100 Hz and you could really hear it grab — it’s very musical and a little goes along way.

Occasionally I will use the Fairchild 670 Compressor Plug-In on bass with great results. I really like the Ocean Way preset as a starting point with a couple dB of gain reduction. Tim’s also a big fan of the Manley Massive Passive EQ Plug-In, so once I find the fundamental frequency of the particular bass that’s being used, I’ll use that to give the bass a little bump with a fairly narrow bandwidth and pull out some of the frequencies above and below. I find it’s really natural-sounding and doesn’t interfere with the kick.

Bob is a great guitar player and that’s a huge benefit. I really like the Harrison® 32C Channel EQ Plug-In on guitars — the tone captured with the software emulation makes my job easier by having to EQ less. I just notched back a little rumble using the highpass filter, added a little gain at 4 kHz, and that was it. The plug–in really helped shape the tone.

Universal Audio really made my job a lot easier by making the greatest emulations of some of the best hardware processors ever built.  In an everchanging music industry, it’s good to know these great tools are available and affordable to everyone.

Engineer/producer Michael Ilbert's has crafted records by the Hives, Supergrass, and In Flames, Taylor Swift and many more.

Tips for Prepping Your Mixing Session

Here's some preparation that needs to be done before you start your mixing session.