The Enduring Legacy of SSL

“An SSL? What’s that?” — an anonymous caller to Le Studio, Morin Heights, Quebec, 1980. It’s hard to imagine it now, but in the late ‘70s and early ‘80s, virtually no one, particularly in the ‘States, had so much as heard of an SSL audio console. Fast-forward to today, where SSL mixing boards like the 4000 E and G+ are practically synonymous with not only the lion’s share of hit music from the ‘80s, but many of the biggest recordings from the two decades that followed as well.

The SSL legacy is a staggering one: among the literally thousands of hit albums produced on its distinctive silver frame are landmark rock titles like Rush’s 1981 Moving Pictures, created on an SSL 4000 B — reportedly the first SSL to find its way to North America — by Terry Brown and Paul Northfield at Quebec’s Le Studio; pop masterpieces like Steve Winwood’s 1986 Back in the High Life again, produced by Winwood and Russ Titelman; iconic modern rock records like the Dave Matthews Band’s Under the Table and Dreaming, produced by Steve Lillywhite at Bearsville Studios in 1994; and hip-hop classics such as Tupac Shakur’s 1996 masterstroke, All Eyez On Me — recorded on a SL 4000 E at Can-Am Studios — which showcased the production chops of Dr. Dre, Dat Nigga Daz, David Blake and others.

Since the SL 4000 B was first manufactured in 1977, SSL mixing desks have been coveted and acclaimed by pop, rock, rap and country producers for their outstandingly punchy master buss compressors (notably those in the G-Series), their aggressive yet musical EQ sections (especially the beloved E-Series “Black Knob” EQ), and their artfully crafted blend of automation, routing options and ahead-of-their-time computer control. No wonder then that a 1996 Billboard Studio Action Chart reported that 83% of #1 hit singles that year had been produced using an SSL board. In fact, SSL claims that more platinum albums have been recorded on SSL equipment than on all other mixing consoles combined.

Way back in 1969 — long before audio hotshots from Andy Wallace to Bob Clearmountain made the SSL 4000 their desk of choice — the fledgling company called Solid State Logic, founded by the visionary Colin Saunders, was beginning life rather less auspiciously as the first maker of solid state control systems for pipe organs, in the small town of Begbroke, Oxfordshire, England. Eventually, the staff’s after-hours dabbling in extra-curricular innovation led to the design of the SL 4000 A, a prototype used principally in Saunders’ own studio, called — rather propitiously — Acorn.

In 1977, however, SSL released the 4000 B, the first desk to integrate a studio computer system with an in-line audio console. Cannily prefacing the technology boom of the ‘80s — and a turn toward a leaner, cleaner sound in pop music — the 4000 would prove irresistible to a new generation of producers, engineers and mixers who were looking for something fresh, high-tech, flexible and decidedly modern. 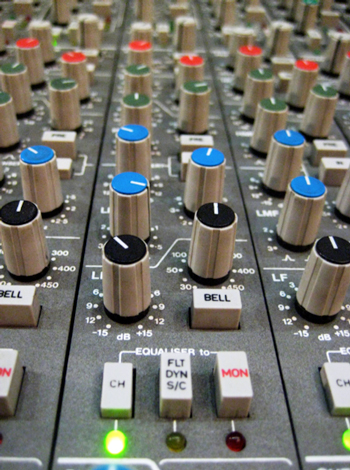 SSL would make audio history again in 1983, with the creation of the E-Series consoles, and especially, the inauguration of a new four-band EQ section — now known simply as the “Black Knob” EQ — developed in collaboration with famed Beatles producer George Martin. While only the Low Frequency knobs on an E-Series EQ are, in fact, black, the name “Black Knob” stuck as an easy way of distinguishing this vibrant and versatile EQ from previous versions. (Later versions, including the G+, allowed customers the option of loading in the E-Series EQ).

Like the nickname, the EQ section itself, though certainly capable of being admirably transparent, was also ready to be anything but subtle: Early adaptors recall that only the slightest tweaks of the Black Knob’s fully parametric middle EQs or the switchable Bell/Curve high and low bands were necessary to achieve quite dramatic results, earning the E-Series a lifelong reputation as perhaps the most dynamic and aggressive console EQ available. That world-famous punchiness is at the heart of why heavyweight artists from Soundgarden to 50-Cent have relied on the E-Series EQs to deliver sonic muscle.

Rebirth of the Cool 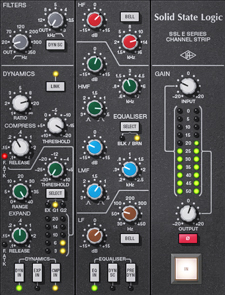 Like Universal Audio’s Bill Putnam, SSL founder Colin Saunders was a true audio visionary — in fact, he was named among the “Top Ten Audio Personalities of the 20th Century” by Studio Sound Magazine in 1999. UA has both artfully and faithfully recreated the SL 4000’s in-line vertical input strip with the new SSL E Series Channel Strip, an exacting circuit emulation of the prized 4000 console channel — right down to the VCA chip characteristics — found in top studios like New York’s Avatar. That’s right: it’s all there — the original “brown knob” EQ as well as the classic “black knob” EQ, with its rich and aggressive band interdependencies; the phenomenal filters; plus the dynamics section, renowned for its compression traits that range from elegant and transparent to the ultimate in “in your face.” UA even steps out into the later SSL lines to adopt a highly responsive Gate featuring a “no-chatter” mode. 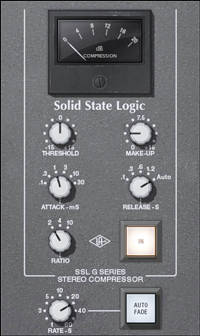 In addition to the E Series Channel Strip, UA has also paid tribute to the SSL G-Series’ irrepressibly fat Quad Compressor, with another spot-on emulation drawn from the 4000 G+. Like the original, the SSL G Series Bus Compressor is based around a smart, simple layout: fixed Attack and Release controls with an Auto Release that incorporates a program dependent response; three fixed ratio settings, including 10:1, 4:1 and 2:1; along with Continuous Threshold Control and Make-Up Gain. Whether it’s exploited across the entire master bus, or used to tame peaks or add extra thwack to individual input channels, the G Series Bus Compressor provides that elusive audio “glue” that the SSL compressor is famous for. And with its included Auto-Fade control and analog-style metering, the G Series Bus Compressor even responds as faithfully to the original as it sounds.

In the end, engineers may argue about what makes the SSL tracking and mixing experience so distinctive, so driving, and so desirable. Some will argue that the 4000 series’ all-discrete design and Class A VCA chip are the key elements to its appeal, while others will point to its awesome summing architecture and flexible routing options. Others see it as the essential mixing board, the only logical choice for automated mixdown regardless of whether the tracking desk was a Neve, Harrison, MCI or, for that matter, an SSL. Everyone, though, can agree on SSL’s key role in the development of the art and science of recording. In fact, when music icon Peter Gabriel and entrepreneur David Engelke purchased SSL in 2005, they made it clear that building on SSL’s legacy through continued innovation was paramount. Paying tribute the best way UA knows how — by delivering the finest possible emulation of these industry-standard instruments — the SSL E & G Series plug-ins make sure that all those qualities are deftly and faithfully rendered, ensuring that the SSL legacy is honored and perpetuated for new generations of groundbreaking artists.

James Rotondi would like to thank Paul Northfield, Steve Hardy, and Can-Am Recorders’ Brian Monteath and Stuart Schenk for their time and insights.

In this UAD Tones & Techniques video, learn how to record and mix a hip-hop track using Apollo x4.