Developed by the highly regarded modeling engineers at Softube, Amp Room plug-ins bring a "less is more" collection of modern and vintage guitar and bass tones to your studio. Comprised of Vintage Amp Room, Bass Amp Room, and Metal Amp Room, this suite lets you track with inspiring tones in real time with the Apollo Audio Interface or mix or re-amp your tracks with any UAD-2 DSP Accelerator. Amp Room titles let you intuitively “click-and-drag” to audition amps, cabs, and even change microphone position via a 3D interface to create custom tones.   Here’s a mix of general and specific hints for getting the most out of these new Amp Room plug-ins for the UAD platform, straight from Softube’s own Henrik Andersson Vogel.

The intent of our Amp Room plug-ins is to not only model the sound of the world’s best guitar and bass amplifiers in the studio, but also to mimic the workflow of guitar recording itself. Just as in the studio, the sounds you get from these plug-ins are a combination of amplifier, cabinet, and microphone placement. So, even though the Amp Room plug-ins don’t have a myriad of amps, cabinets, and effects, there’s a lot of variation to be found by combining these parameters in different manners — just like things would work while recording a physical amp in the studio.

Just like in real life, the differences in microphone placement alone will account for a wide range of sounds. By grabbing the microphone stand with the mouse pointer, you can place the stand close or far away from each cabinet in the Amp Room collection. Placing a directional microphone close to the cabinet will give you a proximity effect, which boosts the bass frequencies of the sonic spectrum. If you think the guitar sound needs to lose some weight, just place the microphone a bit farther away. 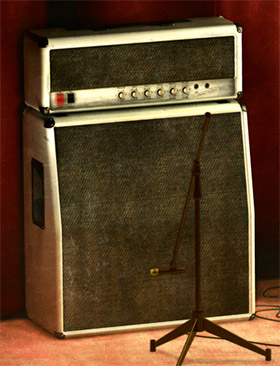 Moving the microphone stand closer or farther
away from the amp, or angling the mic, can yield
a wide variety of sounds.

With cabinets that have several speakers, you will notice that there are some quite obvious phase differences between different microphone positions. Moving the mic back and forth while playing back a sound through the amp can yield a unique phasing effect due to the difference in distance from the speaker elements to the microphone.

Also, try angling the mic when it’s closest to the cabinet — you can almost go all the way to 90 degrees off-axis. An angled placement is useful if you want the power of a microphone in close proximity to the cabinet, but want to take out some of the harshness that can occur when the mic is pointing straight on-axis into the speaker.

While the workflow is similar between the three Amp Rooms, there are differences too. So let’s take a look at each one.

The Vintage Amp Room plug-in contains three classic guitar amplifiers. Don’t let the word ”guitar” limit you, though — these amps are just as useful for electric pianos, organs, synthesizers, or whatever you may feel like running through a nice amplifier. If you want to just get the cabinet sound, you can turn off the amp. This is a great trick to get direct-recorded keyboards to blend in better with guitars and drums.

When you first open the plug-in, you’ll find the White Amp ready to rock. This is a classic British amplifier, widely used among rock ’n rollers. Turning up its power amp gives you a large, growling distortion that is great for massive chords. The preamp gain gives a fizzier distortion especially useful for solo playing. Keep both at moderate levels and you’ll find yourself with a nice bluesy tone that breaks up just the way it should when you strike the guitar strings harder. 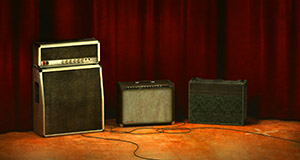 The Vintage Amp Room gives you three classic amps
to choose from: White, Brown, and Green.

By clicking the amplifier and sweeping your mouse to the right, you’ll select the Brown Amp. This is an American made classic, known for its clean and spanky tube tone that breaks up to a nice, warm, and slightly muddy distortion if you push it hard. The Brown Amp also sports a nice old tremolo. This amp can been used in most musical styles, but it’s especially at home in country, blues, and alternative rock where you don’t need over-the-top distortion. The controls do what you expect them to, so if you have ever set the sound of a guitar amp, you’ll know how to work the Brown Amp.

The Green Amp brings us back to the United Kingdom and the sixties, where this bright and beautiful-sounding amp first saw the light of day. It is a studio standard to this day and alternative pop and rock groups appreciate its warm edginess. The Green Amp’s three-channel layout is a bit quirky, but you’ll get the hang of it in a matter of minutes. The three channels have their own distinct sound character and you can find the tone you’re after by mixing and matching the levels to taste. There is also a Tone control, which goes from High to Low. Its direction is reversed compared to how most amplifiers are laid out, but fortunately someone has carved markings into the front panel so it’s easy to see which direction is which!

The Bass Amp Room plug-in only contains a single amplifier, but it’s a highly versatile one, having proven equally useful to folk rockers Band of Horses and to Motorhead’s Lemmy. This amp can be run through either of the three different cabinets, and just like with the other Amp Rooms, you can place the microphone at any distance and angle it when it’s close to the cabinet. The cabinets are a classic 8x10”, 4x12”, and an open back 1x12” cabinet. Don’t dismiss the latter without trying it, you’ll be surprised how useful it is to place the bass sound in the mix.

Bass Amp Room's DI section allows you to blend and
tweak both the amped and clean signal.

Many engineers like to make a blend of the clean DI signal and the mic’ed up amplifier, so we added a DI section at the bottom. Adjust the blend with the DI/Amp Balance slider, or tweak the tone of the DI portion of the sound with the effects knobs.

To let the DI signal cover the lowest frequencies of the sound, set the High Cut knob at its lowest setting (about 200 Hz), turn up the Tone knob towards Fat, and use the limiter to keep the DI sound very dynamically even. When you carefully blend this in with a dynamic and lively amplifier sound that is not too heavy on the low frequencies, you simultaneously provide your mix with a rock solid low end as well as a dynamic and present bass guitar sound.

This amp will give you the most fiercely aggressive high gain sound you can imagine — whether you’re after a beeswarmish high gain or a darker, more guttural sound to go with those drop C tunings.

Apart from its distinct amplifier sound, there a few things that set the Metal Amp Room apart from the other two Softube Amp Room plug-ins. First, it contains an extremely fast gate — it’s actually faster than any analog gate around. This is very useful for metal style rhythm guitar, where you often want to have dead silence in between the palm muted chug-chug-chugs. Second, you’ll find the Metal Amp Room has two different cabinets and two different microphones — a dynamic and a condenser. This gives you the option of spreading both mics out to the left and right sides of the soundstage for a big, wide sound. 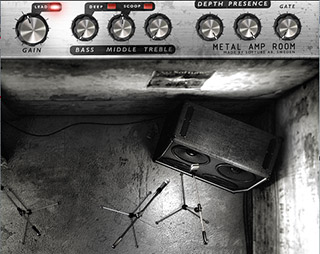 The Metal Amp Room is also useful for much more than metal. Try turning down the gain for a clean amplifier sound. This is useful for clean guitars, but also great to bring some life to keyboards and drum machines.

One of the most exciting things about bringing Softube Amp Room plug-ins to the UAD platform is its tight integration with Apollo’s realtime UAD processing. Historically, recording and monitoring guitar through a computer-based recording system would generate an audible amount of latency as the signal travels through the audio interface, is processed by the plug-in, and travels back out. When tracking with UA's Apollo audio interface, all of the plug-in processing is done onboard, dramatically cutting down on the latency to the point where you can monitor and record without hearing any delay your headphones.

Tracking in realtime with Apollo is easy — just pull up the included Console application, select the Amp Room plug-in of your choice on the insert, dial in your tone, and start recording. You can choose whether to monitor the effect, or print straight to Pro Tools or whaever DAW you're using.  If you have a UAD-2 DSP card, Softube Amp Room plug-ins work great for re-amping your recorded guitar track — just pull up any amp and tweak away until you have the tone you need. 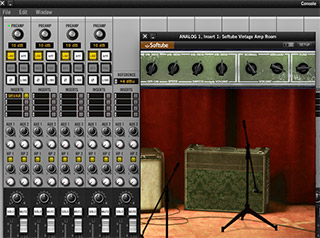 Track guitar in real time with Apollo or re-amp your tracks
with any UAD-2 DSP Accelerator card.

Even if you have a physical guitar amplifier you like to use, it can still be great to have access to a good amplifier models for your mixing process. For example, you can make a virtual dub of a physical amp recording, or create more power and stereo width by taking a DI parallel to the physical amp recording, running the DI through one of the Amp Room plug-ins, and panning the two recordings out to the left and right sides.

Sometimes it can also be great to mix in a tad of an amplifier model underneath a physical amp recording. For example, many rock and metal bands make the mistake of recording with too much distortion. “Because a lot of distortion is going to give us a lot of power, right?” Wrong. Come mix time, you may find yourself with a weak-sounding fizz that no amount of equalization will fix.

You may still want to keep the character of the physical amp, so the remedy can many times be to run a DI parallel through a clean or slightly overdriven amp, such as the Brown Amp with not too much gain. When you mix this in with the overly distorted amp recording, you may find that the string separation from the Brown Amp recording brings back a sense of largeness, gut, and presence to the original recording.

So, there you have it. We’re thrilled to finally to be able to bring these unique and flexible guitar amp modeling tools to the UAD platform. Give them a try for yourself, we’re sure you’ll like what you hear.

Mixing Eskmo’s "The Light of One Thousand Furnaces"

Multi Grammy-winning producer Stuart Price (The Killers, Madonna) weighs in on his techno influences, analog upbringing, and the go-to UAD plug-ins that define his workflow.