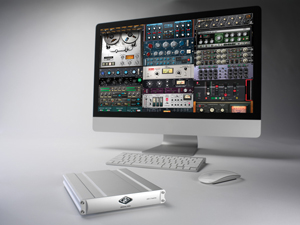 What is the UAD-2 Satellite?

UAD-2 Satellite is a FireWire 800/400 DSP accelerator that runs the growing library of UAD Powered Plug-Ins. UAD plug-ins are widely recognized as the highest quality tools for mixing and mastering, with an emphasis on emulations of classic analog gear. The UAD-2 Satellite ships with the Analog Classics bundle, which gives you vintage compression, EQ and reverb tools, right out of the box.

How is the UAD-2 Satellite different from UAD-2 DSP Accelerator Cards?

The UAD-2 DSP Accelerator Cards are made for PCIe slots in a desktop computer or expansion chassis. UAD-2 Satellite, on the other hand, is an external DSP unit (with power supply) that connects to Intel-based iMacs, MacBook Pros and 64-bit Windows 7-based PCs via a FireWire 800 or FireWire 400 connection. (Note that Windows 7 PCs require an additional PCIe-to-FireWire adaptor.) Both the UAD-2 PCIe and UAD-2 Satellite systems can run the full library of UAD-2 Powered Plug-Ins. The differences between the two products are primarily their different connection protocols. PCIe has greater bandwidth and lower latency than FireWire, but FireWire is more convenient and portable.

I already own a UAD-2 PCIe system, can I add UAD-2 Satellite to that system?

Yes, UAD-2 Satellite works just like any other UAD-2 PCIe card, whereby you can add a card to your My.Uaudio “system” and the UAD plug-ins will be authorized for all UAD devices in that system. Systems can contain up to four UAD-2 devices. By adding a UAD-2 Satellite to your system, you can "take your plug-ins with you" and mix your sessions in other studios, etc.

Can I use multiple UAD-2 Satellite units together in the same system?

I have a computer that has both FireWire 800 and PCIe slots, should I buy the PCIe card or the FireWire version?

How many plug-ins can I run on a UAD-2 Satellite?

The number varies depending on the sample rate you're using, as well as how many FireWire devices are on the bus. For a complete breakdown of UAD Powered Plug-Ins instance counts, check out the UAD Instance Chart.

Does UAD-2 Satellite allow for daisy chaining to other FireWire devices?

No! You can enjoy full use of the FireWire 800 bandwidth, even when daisy chaining FireWire 400 devices. Just connect UAD-2 Satellite first in your chain.

Can UAD-2 Satellite be bus powered over FireWire 400 or FireWire 800?

Does daisy-chaining other FireWire devices limit the amount of UAD plug-ins I can run?

To help you get guaranteed performance out of UAD-2 Satellite, there are settings in the UAD Meter & Control Panel (in the FireWire tab) that let you allocate the fixed amount of FireWire bandwidth that UAD-2 Satellite will consume. This ensures the same number of plug-in instances are available from session to session.

So why can’t I run as many UAD plug-ins on my UAD-2 Satellite QUAD as my UAD-2 QUAD PCIe? A QUAD is a QUAD, right?

This is purely a FireWire bandwidth issue. Assuming you don’t run out of DSP to run the plug-ins you want, it all comes down to the available bandwidth of the FireWire bus. Think of a two-lane highway versus a seven-lane freeway; on the seven-lane freeway, more cars can get through simultaneously. Similarly, plug-ins require their own I/O stream in order to be heard, and FireWire has a limited amount of streams compared to PCIe.

I understand that the processing of the UAD plug-ins is done on UAD-2 Satellite. Does that mean I can’t use the freeze features of my DAW?

You absolutely CAN use freeze on your DAW with UAD-2 Satellite; just hit the freeze button and the audio channel gets processed faster than real-time, just like any other AU/VST plug-in.

What is the lowest hardware buffer setting I can use with UAD-2 Satellite for stable operation?

UAD-2 Satellite natively runs at a 512 sample buffer or higher. All FireWire DSP accelerators require a buffer limit to operate reliably; this is inherent in how fast data can be transferred over FireWire. In designing the UAD-2 Satellite driver, we were able to implement dynamic buffering that enables lowering the audio interface hardware buffer setting (128, 64, etc) while using UAD-2 Satellite at a higher setting. Specifically, when the hardware buffer is set lower than 512, UAD-2 Satellite continues to work at a 512 sample buffer — allowing for critical low latency tracking workflows. Note that UAD-2 Satellite plug-ins should not be placed on the input or master output path during tracking, to insure the lowest possible throughput latency when tracking. UAD-2 Satellite can, however, be used on reverb send/return tracks because, typically, those paths are not timing critical.

Will UAD-2 Satellite work for tracking with UAD plug-ins on input in real time?

The latency will probably be too high for most users. This is a very common issue with FireWire DSP accelerators, as the buffer settings required in all DAWs for stable operation are too high to be used in a tracking workflow. Therefore, we recommend using UAD-2 Satellite in the mixing and mastering stages of your workflow, where latency is less of an issue.

I've heard about Intel's Thunderbolt technology. How does this affect UAD-2 Satellite?

Universal Audio is one of a handful of developers in the audio community for Thunderbolt, a high-speed I/O connection from Intel. One of the great things about Thunderbolt is its full backward compatibility with many protocols, including FireWire. The UAD-2 Satellite can connect to Thunderbolt ports using the Apple Thunderbolt to FireWire Adapter.

Where can I see UAD-2 Satellite specifications, system compatibility, and further details?

Glad you asked! Our UAD-2 Satellite Support page is the comprehensive resource for all the details.

Glass Animals' mastermind Dave Bayley talks about how he uses UAD plug-ins and UA hardware on the group's forward-thinking productions, as well as some cool tips for crafting interesting guitar and vocal tracks.