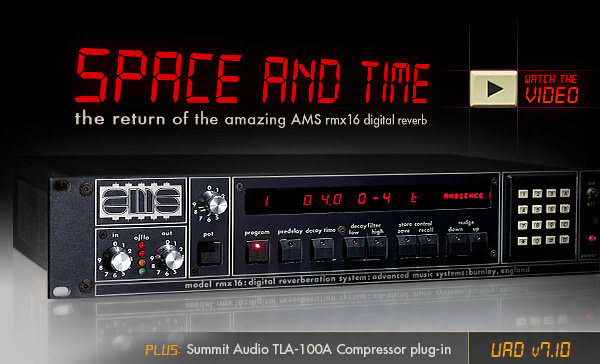 The AMS RMX16 was the world's first microprocessor-controlled, full-bandwidth, digital reverb. From U2 and Peter Gabriel to Radiohead and Rihanna, the unique and lush reverb programs of the RMX16 are instantly recognizable. Heard on hundreds — if not thousands — of seminal recordings from the 1980's to today, the AMS RMX16 hardware is still found in nearly every major recording studio the world over.

In developing the UAD plug-in version of this landmark processor, Crabtree dusted off his original schematics for the hardware unit, yielding an exact instruction-for-instruction model of each of the original algorithms in the hardware. Now, owners of the Apollo audio interfaces and UAD-2 DSP Accelerator hardware can record and mix with an exacting digital emulation of this unique, lush-sounding reverb.

“Only a full and faithful implementation of the RMX16 would satisfy me,” said Mark Crabtree. “I’m excited to have the RMX16 on the UAD-2 platform. I have spent nearly as long designing the plug-in as I did on designing the original unit from scratch!”

A studio mainstay since its introduction in the 1980s, the Summit Audio TLA-100A Compressor is revered for its hybrid tube/solid-state circuit, warm compression, and intuitive interface. Developed by Softube, the Summit Audio TLA-100A Compressor plug-in for Apollo audio interfaces and UAD-2 DSP Accelerator hardware is an exacting emulation of this legendary compressor.