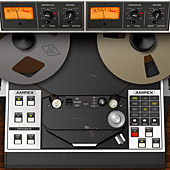 In professional recording studios, the Ampex ATR-102 Mastering Tape Recorder is a frequent companion to a workhorse 16- or 24-track Studer machine, completing the classic tape-based signal chain. The Ampex ATR-102 offers a more aggressive sound versus the sophisticated-sounding Studer, and in the words of just about every engineer who owns an ATR-102, it makes a final mix “sound like a record.”

In this Plug-In Power article, we'll provide some basic tips and tricks for using the Ampex ATR-102 Mastering Tape Recorder Plug-In for UAD-2. Because the Ampex ATR-102 plug-in is very feature-rich, a thorough read of its chapter in the UAD User Manual is highly recommended. That said, below are some helpful tips to get you started.

The primary function of the ATR-102 plug-in is as a mixdown tape machine — adding tone, dynamic character and "glue" to your mixes. Therefore, the best way to demo the Ampex ATR-102 is to place it as the last processor in your DAW’s master fader (or second-to-last, if using a brickwall limiter like the Precision Limiter).

In the analog world, engineers will periodically "check in" on the ATR-102 hardware, to see how the mix is responding to the machine and tape — ultimately printing to tape when the mix sounds right. It's during these "check-ins" that engineers will often tweak calibration levels or tape speeds. In the DAW environment, however, you have two options: you can feel free to leave the ATR-102 plug-in active during the entire mixdown process, mixing “through” the plug-in, or you can wait until the mix is complete to audition the plug-in on the master stereo bus. With the ability to change heads, speeds and formulas on a whim, the ATR-102 plug-in is totally flexible versus its analog counterpart.

Under normal use, the goal is to get the ATR-102 meter averaging around 0 dB or below. If the mix is not averaging there, the first place to go is the Cal Level button. Cal Level automatically sets tape calibration, affecting the operating levels in the plug-in, and can be used to compensate for overly high (or low) levels at the input of the plug-in. Using Cal Level takes care of the gain setup, by automatically setting unity gain from input through output. Traditionally, various tape formulas have recommended operating levels (see the manual for more information), but feel free to use Cal Level for purely creative exploration.

The Reproduce and Record (I/O) controls.

For further gain control, reach for the Record (Input) Gain knob. As it is on the Ampex hardware, Record is the knob on the right. You can think of Record as the primary “color” control for the plug-in. Just like magnetic tape, lower Record levels will have a cleaner sound, while higher levels result in more harmonic saturation and coloration. Higher Record levels will also increase the output level from the plug-in. The Reproduce control can be lowered to compensate for this, but the metering will no longer be in a calibrated state.

Because the Ampex ATR-102 plug-in features many combinations of Tape Formulas/Head Widths, Speeds, and Emphasis EQs, simply switching among the various combinations with Auto Cal enabled will reveal a large matrix of automatically calibrated internal “presets” without even opening the presets folder. However, users can also access a bank of artist presets to access the prefered ATR-102 settings from several famous engineers — for mixing, for mastering, for use as inserts, or for special effects.

A wide range of artist presets are included.

Note that each Tape formula has its own subtle sonic variation, distortion onset, and tape compression characteristics. Each Speed setting (IPS) provides distinct frequency shift, head bump, and distortion characteristics; higher speeds have higher fidelity and 3.75 IPS has a distinctively “lo fi” character. Head select (1", 1/2", or 1/4") provides subtle differences in stability, fidelity and noise.  Like with the original ATR-102, a popular custom aftermarket tape head is available for the plug-in which enables the use of 1” tape stock, providing higher fidelity via greater track widths.

While using the Ampex ATR-102 for final mix enhancement is its primary use, this plug-in has a huge palette of tonal options for use as a creative “tone box." An important first place to explore is the calibration controls. Clicking the “Open” button pushes aside the reels to reveal the many tone-shaping possibilities. Record EQs and Bias can have a huge affect on the modeled tape response. Additionally, try using slower tape speeds and the Sync head playback option for some highly colored responses. Feel free to experiment.

Advanced tweaking is possible with the hidden controls panel.

Crosstalk is the signal bleed that happens on multichannel tape decks; in simple terms, you can hear a bit of the left channel on the right, and vice-versa. The ATR-102 plug-in models the crosstalk behavior between the two channels, which chages in frequency response based on Speed. By default, the plug-in's Crosstalk level matches the hardware, but the amount can be increased for more extreme results.

Wow and flutter are traditionally "undesirable" pitch changes introduced by the mechanical nature of tape machines. Wow refers to very low frequency fluctuations, while Flutter refers to faster fluctuations. In a modern context, wow and flutter can impart a great vintage vibe to your tracks. By default, the plug-in emulates the original ATR-102 hardware behavior, but can be set to extreme settings for highly creative effects.

In addition, the ATR-102 features a Tape Delay function, which can be adjusted for up to 1000ms (one second) of delay, letting you produce very cool tape slap/echo effects. When using a 0ms delay with added Wow and Flutter, the ATR-102 plug-in can produce an "automatic double tracking" effect — perfect for sources like vocals and guitars. Just use the Dry/Wet mix for a greater or lesser effect.

The Manual Cal
controls have MRL
and "external tones".

Ready to geek out?  It's still common for veteran engineers to have their own techniques for getting a tape machine to respond exactly as they see fit. The Ampex ATR-102 offers a Manual Calibration mode for tape experts who wish to perform a custom calibration. Using the built-in test tone generator complete with virtual MRL test tapes, the plug-in can be configured exactly as desired. The UAD manual includes the recommended Ampex configuration method, perfect for "learning the ropes."

How a Workhorse Tape Machine Plug-in Preset Came to Be