The Classic Sound of the Moog Ladder Filter

Some speculate that “Dr. Robert” by The Beatles, recorded on April 17, 1966, is a reference to the inventor of the music filter and synthesizer Robert (Bob) Moog (pronounced like "rogue," not "fugue"). Alas, although such a tribute would be well deserved (Bob Moog studied for his Ph.D. at Cornell University in ’65), the song more likely refers either to Dr. Robert Freymann, who apparently supplied the band with amphetamine cures for a variety of “ailments," or to Bob Dylan, who allegedly introduced the band to pot! Whichever the case, the track itself proved to be a premonition. Later that same year, one of the greatest and most important inventions of modern music technology was made: the ladder filter!

On October 10, 1966 (coincidently, the day after John met Yoko at the Indica Gallery in London), inventor Robert Arthur Moog filed the innocuous-sounding patent #3,475,673, titled “Electronic High Pass and Low Pass Filters Employing the Base to Emitter Diode Resistance of Bipolar Transistors.” As the patent application slogged slowly through the system, Bob Moog worked to develop his first commercial modular synthesizers to compete with the monolithic and expensive RCA synthesizers of the time, which cost over $100,000! These early Moog modulars found homes with Paul Beaver and Wendy Carlos, leading to the first commercial recording of a Moog, attributed to The Zodiac's November, 1967, album Cosmic Sounds.

This filter-design patent was finally granted on October 28, 1969. Earlier that year, George Harrison had used his personal Moog Modular on several tracks on the pivotal Abbey Road album, including “Here Comes The Sun.” This was the first widely heard sound of a Moog synthesizer.

Moog business records also confirm that Mick Jagger of the Rolling Stones purchased a system during the same period, but rumor has it that it was only used as a prop. It was later sold to those '70s space cadets from Germany, Tangerine Dream. These early, wealthy synthesizer pioneers all recognized one thing: This new technology was something innovative and sounded special. In fact, to use a modern colloquialism, it sonically “kicked ass,” and went on to become the design reference and sonic benchmark for nearly every synthesizer that has followed. Bob Moog is thus considered the founding father of the music filter, the synthesizer, and the original inspiration/catalyst for so much of today’s electronic music. 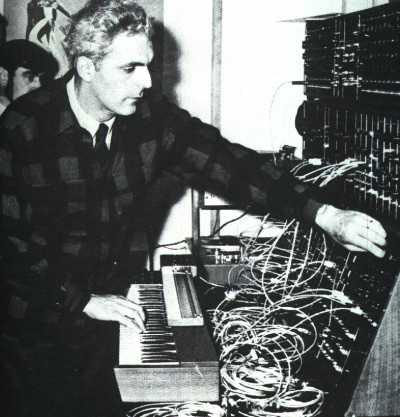 Bob Moog at the helm of the Moog Modular System

The Moog Modulars and the 904 Filters

The first Moog synthesizer prototype was designed in collaboration with Herb Deutsch (a composer and lecturer at Hofstra University) from July through September, 1964. Bob published his AES Journal article, "Voltage Controlled Electronic Music Modules," in July, 1965 (Volume 13, Number 3), and demonstrated custom modular synths in the same year, with the production models 1, 2, and 3 coming to market in 1967. The AES article featured British-born Composer Eric Siday, who commissioned Moog to build the first percussion synthesizer, and was the second-ever Moog customer (Alwin Nikolais, a composer and modern dance choreographer, was the first).

The Moog 904 series is the historic base-design for the Moog Filter series from the early modular synthesizers and influenced all those that followed. The 904A is the 4-Pole 24 dB/Octave Low Pass Filter (LPF), the 904B is the 24 dB/Octave High Pass Filter (HPF), and the 904C is the Filter Coupler, which allows band pass filtering (BPF). The 900 series prices in 1969 ranged from $125 for an envelope generator to $1,225 for a sequencer, which are ironically around today’s-dollar prices for plug-ins and DAWs! The 901 ABB formed the oscillator section, and the 902 the Voltage Controlled Amplifier or VCA.

Studio musicians wanted a cut-down version of the modular to take on the road. In essence, they wanted the Moog sound with portability. Despite some radical design concepts with sculpted plastic and sci-fi looks, the classic wood cabinet was chosen by the musicians that Moog polled. The MiniMoog filter was adapted directly from the modular synthesizers and the temperature-compensated oscillators and contour generators designed from scratch.

The MiniMoog model D debuted in June, 1971, at the National Association of Music Merchants (NAMM) Convention (following 1970 prototypes knows as models A, B, and C). The first Minis were originally manufactured in Trumansburg, New York, and the MiniMoog quickly established itself as THE all-time classic mono-synth and formed the sonic backdrop of many early '70s classic records such as Stevie Wonder’s Fulfillingness' First Finale. 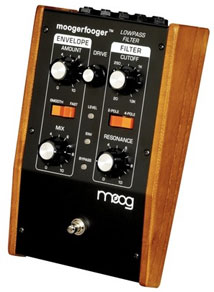 The MoogerFooger introduced a new analog, voltage-controlled lowpass filter and envelope follower design by Moog at an attractive price. This put a MiniMoog-style VCF filter in a stomp-box form factor with knobs to control filter, cutoff, resonance, envelope, and mix. The filter has a rocker switch for 2-pole and 4-pole modes, a smooth-fast rocker for envelope follower response, and the drive knob allows harmonic overdrive of the input.

The Voyager was first publicly touted in 2001 (although it shipped in 2002) as a new MiniMoog for the modern MIDI era, and clearly referenced the classic design cues of the original MiniMoog. There were many new features in the Voyager, but for the purpose of this article we’ll focus on the updated filter section, since this is all about Moog analog filters!

The spacing control, which allows the cutoff frequency of the dual filters to be changed independently, was a new core Moog filter feature. In dual lowpass mode, the spacing control changes the cutoff of the right filter channel only, which allows for interesting stereo effects when the outputs are hard panned. In highpass/lowpass mode, the spacing control moves the cutoff frequency of the highpass filter and the cutoff only affects the lowpass filter. In this mode, resonance only affects the lowpass filter. Riding the spacing and cutoff controls together allows the pass band width to be dynamically changed. The extended modulation matrix also added considerably more filter control than the original Moog, including the essential ability to clock-sync LFOs for BPM-locked filter effects for timed sweeps/chops.

What makes the Moog filter sound special has been the subject of many academic studies and much speculation. The filter can certainly be overdriven in a musically pleasing way, as all the transistor stages clip gradually. But it is also that famous 24 dB per octave filter slope resonant sound that is central to the essence of the Moog sound! The way that you can crank the resonance without losing too much of the low end and sweep the cutoff and hear those beautiful “transitor-y” harmonic peaks. When Jason Gross, interviewing Moog for Perfect Sound Forever in March, 1997, asked him to name his proudest creation related to synthesizers, Bob made the most humble of comments:

“I'm well-known for the lowpass filter that is the basis of 'the Moog Sound.' It's a simple circuit, but it works really well.”

1. Trocco & Pinch – Analog Days. The Invention and Impact Of The Moog Synthesizer
http://www.amazon.com/Analog-Days-Invention-Impact-Synthesizer/dp/0674008898