The Inner Workings of the Moog Multimode Filter

Editor’s Note: This article was originally featured in a previous edition of our WebZine. We're running it again because of the ongoing relevance of the information, the availability of the award-winning Moog Multimode Filter, and its inclusion in the newly introduced, money-saving Electronic Music Bundle at the UA Online Store.

The Moog four-pole resonant filter is a classic design with a distinctive, characteristic sound. Structurally, the filter is formed by placing four identical one-pole filters in cascade (see Figure 1) and creating a feedback loop around them. As the amount of feedback is increased from zero, the (initially coincident) closed-loop poles of the system diverge, with two poles becoming increasingly resonant. If the four filters are normalized to have a DC gain of unity, the closed-loop system becomes unstable for feedback gains exceeding four. Figure 2 shows the trajectory of the system’s poles as feedback is increased.

When the system becomes unstable, oscillation will result. Theoretically, the system could maintain a sinusoidal oscillation indefinitely at constant amplitude with the feedback gain set to exactly four, as the system would be marginally stable. In practice, to produce oscillation, feedback gain is increased beyond four, so that the system is strictly unstable, and the oscillation grows until it reaches a point of saturation, or maximum amplitude. Because of the filter’s instability, saturation is necessary to prevent the amplitude of oscillation from growing in an unbounded manner. The saturated output will not be a pure sinusoid, but will contain energy at harmonics of the frequency of oscillation, due to the saturation. In order to implement the Moog structure, four one-pole filters must be connected in a feedback configuration. 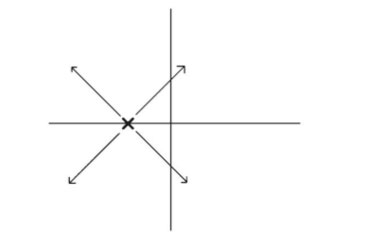 The Moog filter was designed to vary the filter’s cutoff frequency over time. Typically the variation is controlled by an LFO (low-frequency oscillator) or an envelope follower, which tracks the amplitude of the input signal. The filter itself thus has two controls: cutoff frequency, which sets the frequency of the four one-pole filters within the feedback loop; and resonance, which sets the amount of feedback in the loop and determines the resonance of the filter.

There are several features of the Moog filter that make implementation as a discrete-time system nontrivial. First, there is a feedback loop containing both a nonlinearity and a series of filters. Second, there is a delay-free path around the feedback loop. Finally, the filters within the loop must have cutoff frequencies that can be adjusted without artifact as a function of time.

For the UA Moog Multimode Filter, a non-standard filter structure was implemented by explicitly modeling the state of the capacitor in the filter illustrated in Figure 3. The alternate structure allows the filter’s coefficients to be changed arbitrarily, at arbitrary rates, without introducing artifacts into the filter’s output. The physical energy represented by the discrete-time filter’s state is thus independent of the filter’s coefficients. Figure 5 shows the outputs for the direct-form filter and the alternate-form filter with a DC input applied, as the cutoff frequency of the filter is varied. As can be seen, the output of the direct-form filter contains artifacts due to the changing cutoff frequency, while the output of the alternate-form filter does not.

In order to implement the Moog structure, four one-pole filters must be connected in a feedback configuration. As an analog circuit design, this can be accomplished by adding a portion of the filters’ output to the input signal. Direct translation to the discrete-time domain is not trivial. Conventional calculation of the filters’ output leads to a one-sample delay incurred when the signal is combined with the input signal. This delay drastically affects the behavior of the feedback loop. Typically, if a linear system contains feedback, the closed-loop transfer function of the system can be computed, and the discrete-time system can be implemented directly, based on the calculated transfer function. However, if there is a nonlinearity present within the feedback loop, this technique cannot be carried out. For the case of the UA Moog filter, the technique would not work even in the absence of nonlinearities, because correct time-varying behavior of the filters depends on the structure developed in the previous section. Thus, the one-pole filters within the feedback loop must be implemented directly. 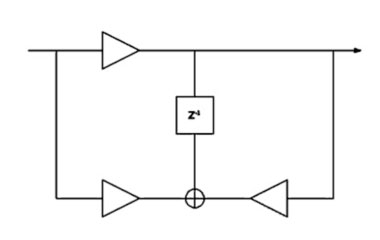 As mentioned earlier, "stable" self-oscillation of the filter depends on the fact that some element of the structure saturates, or "clips." This requires inclusion of some form of nonlinearity within the filter’s feedback loop. Because of the presence of this nonlinearity, and because of the special one-pole filter structures used, pre-calculation of closed-loop behavior could not be carried out, and the filter had to be implemented directly as a feedback structure. Special techniques were developed to implement this feedback structure without incurring the one sample of delay usually encountered.

We were able to solve all the above problems through various signal-processing techniques. The result is a discrete-time structure that approximates the behavior of the Moog resonant filter, without the common artifacts displayed by many discrete-time systems. 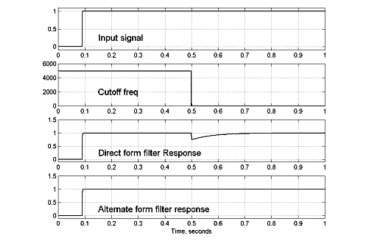 For an excellent treatment of the Moog filter, root locus techniques and other topics, see my fellow UA DSP engineer Tim Stilson's Ph.D. thesis, "Efficiently-Variable Non-Oversampled Algorithms in Virtual-Analog Music Synthesis," which is available for downloading.