For owners of the original 610 desk, having one often meant buying just the individual modules, deciding the configuration of your purchase, and building your console from scratch. This was clearly a different era, before mass-produced audio equipment was widely available and when “audio engineer” often meant more than just making records. However, a few full-fledged desks were built by Bill Putnam himself, complete with a fabricated frame, power supply, metering, and buss/effects routing options. 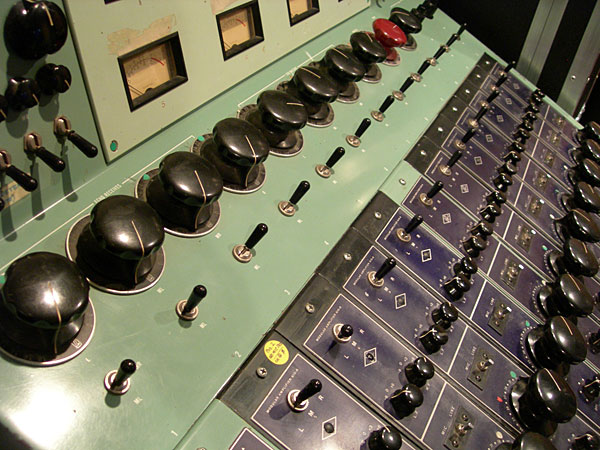 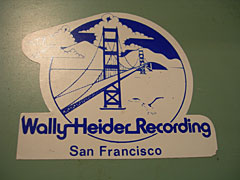 Universal Audio recently had the privilege of borrowing one of the most famous examples of the very rare tube-amplified 610 consoles. This extremely well-built example was originally fabricated by Frank DeMedio for Wally Heider’s remote recording service in the early '60s. Hired by Putnam, Wally originally handled many of the live recording dates booked by Putnam. Heider eventually started his own business, called Wally Heider Recording, and had studios in Los Angeles and San Francisco. This console certainly recorded and mixed some of the greatest performances of the era, including many live performances by all the “Rat Pack” members, and even recorded the very last concert under the baton of Igor Stravinsky in Los Angeles. The Heider 610 is one of the rare, early, modular desks, complete with the first use of echo sends and switchable inputs.

Putnam’s very first use of external reverb was turning the studio men’s room into a clandestine echo chamber. 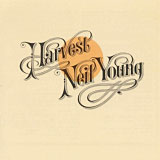 In the early '70s, long before this one-of-a-kind desk's historical significance could be anticipated, Neil Young bought the 12-channel board (which had ended up in San Francisco by that time) from Wally Heider. Young immediately moved it to The Ranch, his property in Northern California, near Half Moon Bay. He installed the desk in a barn, which he used as a recording studio, and employed it recording such seminal projects as Harvest, and may other classic albums. Interestingly, while visiting the UA booth at AES, Grammy-award-winning producer and engineer Elliot Mazer recounted his experience using the “Green Board” (as Neil Young and his team affectionately call it) on the Harvest session, which he engineered.

A few days before AES, the board was carefully delivered in its custom road case to Universal Audio by Young's highly accomplished and long-time audio engineer John Nowland. When it arrived, we unpacked it from its case, brought it into UA’s control room, unfolded the portable desk’s legs, and hooked up the formidable power supply. During its stay at Universal Audio, UA's own techs checked and serviced the modules. Our engineering team took advantage of the opportunity as well and spent some time studying and documenting the 610 console.

The console had not been used for a few years, but it powered up with no problem and passed audio. We traced an intermittent crackle to an oscillating module, which was easily swapped (while the desk remained powered) with a spare. This was another clever precedent conceived by Putnam with the 610: the ability to replace faulty modules mid-session. 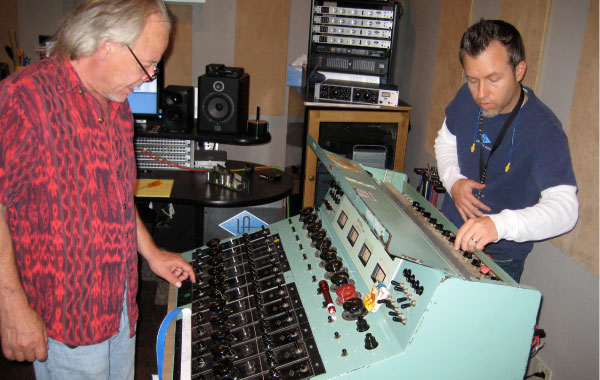 John Nowland and I massage the 610 into use for a session.

At that time, we decided the most entertaining thing to do would be to put the 610 through its paces in front of the press, who were being treated to their “day with UA” on the Monday following the AES convention. Our first goal was authenticity, so we decided that recording through the 610 “live to two-track” would perfectly replicate how it would have been done at the time the console was first used. I assembled a fantastic band from UA’s multi-talented staff: Ichi Nagai (product manager) on alto sax, Jim Wintermyre (software engineer) on guitar, Dan Becker (customer service) on Wurlitzer and Hammond, Dave Berners (chief scientist, DSP) on bass, and Derek Bodkin (trade show manager) on drums. With no time to rehearse, we picked an easy standard with “All Blues.” I engineered. 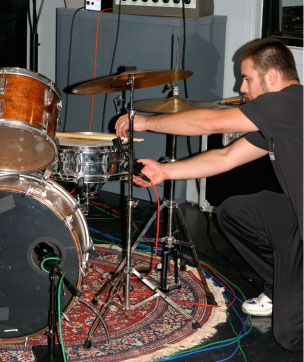 John Nowland, J.D. Keiser (another UA staffer), and myself prepared for the recording. We set up the studio and instruments for a live, “all-in-one-room” performance. Next, we hung the mics. A 12-channel input snake was hooked up to the 12 mic inputs on the 610. This desk was designed before the advent of externally powered mics, so we avoided mics that needed external phantom power. 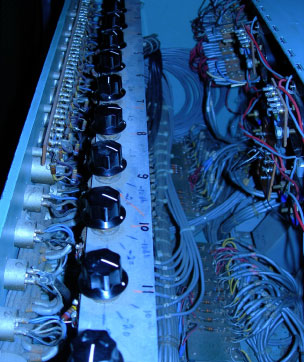 Furthermore, the 610 was designed before mics had a lot of output-it has less headroom than more modern preamps. The 610 desk had been modified with a 4-way switch for each channel (cleverly hidden in the top access panel), which provided four positions of input padding: Off, -10, -20 and -30 dB. This came in handy for some of the higher-output mics, like the battery-powered Rode NT-4 stereo condenser we used as overhead. We optimized mic position for phase, bleed, and best sound. Each 610 channel has simple fixed-frequency high and low shelving EQ, and we used this tonal shaping where appropriate. For period-appropriate limiting, we patched in the Putnam-designed 176 Limiter for taming the kick drum dynamics a bit: an 8:1 ratio, with medium attack and slow release. 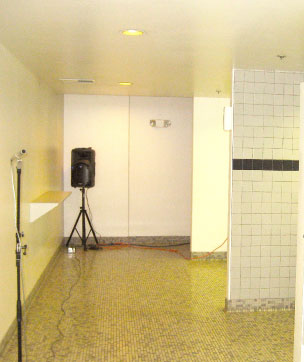 Echo from the men’s room

Later, we decided that recreating another aspect of the “early Putnam sound” was critical: echo chamber. Putnam’s very first use of external reverb was turning the studio men’s room into a clandestine echo chamber. Putnam of course conceived external reverb as a controlled effect during recording and mixing, and his hit with the Harmonicats' “Peg O’ My Heart” was the first to take advantage of this new technique. Consequently, the 610 was the first desk to have effect sends built into each channel.

Following in Putnam’s footsteps, we set up a Mackie powered speaker and a battery-powered omni condenser that were positioned at opposite ends of the large, tiled bathroom. The individual channel effect sends were set and the reverb return was brought up on one of the 610 channels. We excited the room with a nice hot signal to increase reverb complexity and to get above the noise floor. Later we put a UREI Cooper Time Cube on the send, to add a little pre-delay to the echo. 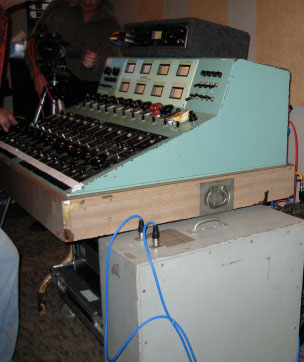 Although we put up a sign warning to use another bathroom, we had a good time scaring the heck out of guys foolish enough to disregard it. Any time we heard someone enter the bathroom, we’d blast them with our sends! We had a good laugh as we listened in on the resulting expletives. … At any rate, the effect was quite pleasing and appropriate for the jazz tune the band was running down. 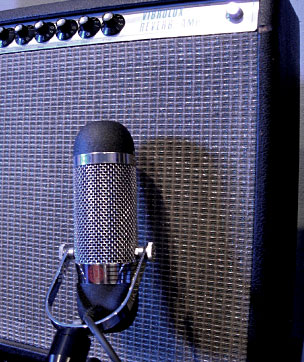 The AEA R84 sucks up the
guitar amp signal

We got the sound totally dialed and the tune rehearsed with just a few minutes to spare before the press arrived. Whew! Just then Wes Dooley of AEA arrived on a surprise visit, and some beautiful AEA ribbon mics! We had just enough time to switch out the sax and guitar mics with AEA R84s. Yet another touch of authenticity to the '60s-era recording we were trying to achieve. Ribbons are a fantastic pairing with any 610, especially Wes’ mics. As the 20-25 members of the press packed into the control room, the band launched into “All Blues” as I explained what they were hearing. I think the 610 was a surprise, and they seemed to really love hearing and seeing it in its full glory. Folks got a chance to play with the desk as the tune ran down a few times-changing balances, soloing or muting channels, changing the echo sends. Once the press left, we ran down the tune one more time in private to focus on the recording.

The performance and sound were wonderful. My only regret is that we didn’t have an Ampex 350 to record to! Many thanks to again to everyone who helped, especially John Nowland. It is likely there will be a follow-up article on the Heider/Green Board 610 with extended historical info provided by John. Keep an eye out! And a special mention to Bill Putnam, Sr., himself for a wonderful design that still works and sounds wonderful after nearly 50 years of almost continuous use. What a fantastic testimony to good design. 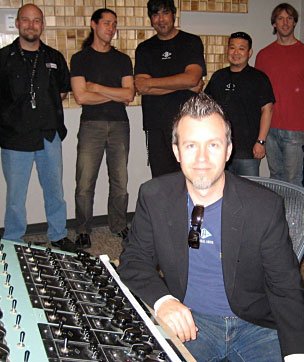