Over a quarter century ago — when Human League topped the charts, Ronald Reagan was president, the Mac Plus debuted, and Compaq started building computers with blazingly fast 16MHz CPUs — the FireWire interface was conceived. It came into prominence (along with USB) in the mid-90s, is still current, and will continue to serve us well for many years to come.

But in today’s data-hungry world, where hard drives are measured in terabytes instead of megabytes, pro audio recording is trending toward higher resolutions, video is high-definition, and both audio and video streams must flow fluently throughout a system, the need to transfer huge amounts of data among computers and peripherals has become critical.

Intel’s Thunderbolt™ protocol was devised with today’s rapacious data appetite in mind. However, if your first thought is, “I guess all my FireWire, USB, eSATA, Ethernet, and other interface-dependent devices are about to become doorstops — as well as my PCIe cards,” note that all of these can work with Thunderbolt. A basic Thunderbolt-to-FireWire adapter costs under $30 (as does a Thunderbolt-to-Ethernet adapter cable), and there are Thunderbolt-to-PCIe card boxes that accommodate full-length PCIe cards. So while Thunderbolt looks to the future, fortunately it doesn’t forget the past.

Thunderbolt Tech Basics
In general terms, Thunderbolt is all about getting data in and out of your computer and peripherals bi-directionally over two channels (PCI Express for data transfer, and DisplayPort for video) using switched-fabric multiplexing architecture. Both channels can zip along simultaneously at speeds up to 10 Gigabits per second, while also featuring plug-and-play, hot-swappable operation using cables.

PCI Express is the high-speed bus used inside computers and is one reason why internal computer cards have enjoyed a speed and efficiency advantage compared to external devices which communicate through FireWire or USB layers. With Thunderbolt, PCI Express-level performance can be taken outside the computer. DisplayPort handles greater than 1080p resolution displays and up to eight channels of audio simultaneously, making it ideal for audio/video applications. Because Thunderbolt devices look like PCI Express or DisplayPort devices to the computer’s operating system, they can use standard, existing drivers.

And remember those FireWire cautions about not daisy-chaining audio interfaces with a hard drive on the same port? That’s not an issue with 10 Gbps bandwidth. And, as the protocol isn’t bus-based, there’s no bandwidth sharing between ports or in upstream/downstream directions.

Wired cable connections can extend to about three meters (10 feet), and provide around 10 watts of power for bus-powered devices. Optical connections extend that length to tens of meters, although you lose the bus-powering potential of wire. Connections are typically configured as a daisy-chain that accommodates up to seven total devices, of which one or two can be hi-res DisplayPort displays. As Thunderbolt’s 20-pin, Mini DisplayPort (mDP) physical connector can potentially handle both optical and wired connections, there should be no issues with having to use different cables for different devices, or mixing both types of interconnections within the same environment.

Laptops? This Changes Everything
Portability and device independence is becoming increasingly important, as has been proven by the speed with which the audio industry has adopted the iPad for less demanding applications like remote control. Thunderbolt made its debut with Apple laptops and is now starting to appear with Windows-based machines as well. One of Thunderbolt’s most exciting applications is in laptops, as they can now tap into far greater power with peripheral devices. 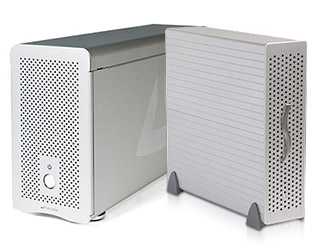 Although tablets like the iPad and even the most advanced laptops can’t reach the same level of power as state-of-the-art desktops, a Thunderbolt-equipped laptop can basically serve as a control center for extremely powerful peripherals, thus attaining that sweet spot of performance and portability. More importantly, because Intel had pro audio and video applications in mind for Thunderbolt, there’s an emphasis on the low latency and accurate time synchronization needed in our world. Thunderbolt devices in the same domain can synchronize within 8 nanoseconds of each other, which is far better than other interconnection technologies.

Thunderbolt will also change how laptops are made. For example, my current Windows laptop has connectors for Ethernet, HDMI, VGA, audio in, audio out, three USB ports, and an ExpressCard slot. These all take up space, contribute to the laptop’s size and weight, and add to the cost. With Thunderbolt needing only one small connector to accommodate all kinds of video and audio, laptops can be thinner, lighter, and easier to hook up. And as laptops can now be more like the “brains” of a setup instead of having to be the brawn, Thunderbolt will open up new options for mobile audio creation.

With the decline of the “big studio,” portability has become even more of an issue. Because fewer commercial studios can afford the real estate needed for rooms with excellent acoustics, and often work with clients constrained by tight budgets, it’s becoming more common to do remote recordings in places with superior acoustics (such as concert halls). Desktops are not only bulky and inconvenient for portable recording, but noisy. A laptop with solid-state drives and peripherals driven by Thunderbolt creates a compact, easily transportable, quiet recording setup that can do quality on-location recording — whether providing an audio component for film, or recording string quartets in acoustically-rich spaces. Universal Audio was the first in the audio realm to provide a recording interface to take full advantage of Thunderbolt with their Apollo Audio interface, and has already shown up in the portable rigs of many recording sessions for just this reason.

Audio and Video
With 12 times more bandwidth than FireWire 800 and 20 times more bandwidth than USB 2, Thunderbolt speeds enable a laptop to rival desktop studio performance; where Thunderbolt really shines is for sophisticated ecosystems that blend audio/video, backup, and sharing. Think about a typical post-production situation, where video has to fly back and forth among workstations, and multiple people may be accessing audio and video libraries — Thunderbolt is ideal for that scenario. Considering the time studios spend on data transfer, Thunderbolt can boost productivity, thus saving money.

Thunderbolt also addresses the dirty little secret of digital technology — backup. It’s often been said that “digital data isn’t real until it exists in more than two places,” but anyone who’s tried to back up terabytes of data knows how time-consuming that process can be. For all the people who don’t back up as often as they should because it’s a time sink and a hassle, being able to back up and transfer in a fraction of the time currently needed is highly appealing.

An HD Protocol for an HD World
For years, peripherals have been I/O-bound. No matter how fast calculations were going on inside a computer, printers can print only so fast, modem speeds are at the mercy of the cable or phone company, and peripherals like hard drives are sometimes starving for throughput. Yet data streams keep getting denser. Television has gone from black and white, to color, to widescreen, to high-definition. Movies have evolved from a mono optical soundtrack to multi-channel surround. Music recording is now being done routinely at 24-bit/96 kHz (or even 192 kHz) instead of 16-bit/44.1 kHz. What’s more, all of these streams often work together — and until Thunderbolt, getting all that data from the computer to its peripherals resembled the kind of traffic jams that happen when four lanes of highway have to narrow down to one lane during construction.

Thunderbolt, despite being relatively new, has such obvious potential not just for present data needs but also for the future that it’s already been adopted by a wide variety of companies. Most importantly, there’s no significant penalty for being an “early adopter” because of the way Thunderbolt accommodates older peripherals. If there’s any market to which Thunderbolt speaks, it’s high-definition audio and video. With both consumer and pro gear turning in that direction, Thunderbolt is an idea whose time has come.

Jacquire King is a three-time Grammy winning producer, engineer and mixer with credits that include Of Monsters and Men, Norah Jones, Modest Mouse, and more.