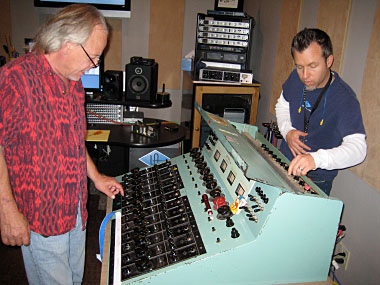 John Nowland (left) with UA Product Manager
Will Shanks and the Green Board.

This month I spoke to John Nowland, Neil Young’s longtime engineer and big Universal Audio fan. John brought Neil’s vintage green 610 console over to Universal Audio recently, and we enjoyed hearing about working for Neil out at The Ranch.

Tell me a bit about your background.

I grew up in Northern California. I played in bands, I worked in record stores and I also worked for the Avalon Ballroom, doing tickets and posters during that time. I had a friend who was working in a studio, and also a couple guys who were working out of the studio in San Mateo: David Rubinson, who's a big producer, and Fred Catero, who's a great engineer. They put on a series of seminars, where they just kind of told war stories, and talked about the process of doing it--not so much showing you how to do it. That got me real interested, so I just kept recording, working on stuff. I had done some recordings at a little studio at home, as part of my college education [laughs], the easy classes. And when I came back down here, I got a job at the same studio in San Mateo.

Sounds like you pretty much learned on the job.

The best way to learn.

I think so. [Laughs]

How did you start working with Neil?

I was living in the same area here, so I knew all the guys. In fact, I'd gone to high school with Neil's wife, among other things, so we were old friends. They wanted to do some recording here on the ranch, and they needed one more guy as an assistant of sorts, so they called me up and said, "Would you like to do it?" And I said, "Well, of course." So I came down. That was the Shocking Pinks record.

About what year was that?

That was in '83. So I came down to assist--I would at least answer the phone and things like that. Then I actually ended up starting to manage the studio, and I did that for a couple years. I worked on some other things for Neil, engineering and mixing. Around '85 or so, he decided that he didn't want to have a full-time studio going. So I went up and I built a studio in Lake Tahoe with some guys--a beautiful studio that unfortunately closed, before it really got open. Then I was kind of bouncing around and ended up building, managing and engineering for Merle Haggard, up in the Redding area for a couple of years. When Merle decided he didn't want to have a full-time staff [laughs], I came back, and did a few records with some old clients. I'd been in Europe off and on a few times doing records over there. And Neil called me back up in 1990 and asked me to do some transfers for him, from analog to digital. So I went back down, and he thought that was going to be a two- or three-week job; somebody else thought it was going to be a two- or three-month job. And I've been here ever since. I'm working on his disc catalog, doing analog-to-digital transfers, and managing the studio, and occasionally mixing something. I'm still here … so it's been good.

It's a great gig. They're wonderful people, and it's a wonderful place to work. Being that it's an artist's studio, as a manager I don't have to necessarily worry about outside clients. I just have to keep the clients that I have happy. [Laughs.] It's all good.

We really enjoyed getting a look at the vintage 610 console that you brought in to Universal Audio for us to check out. Does it still get use at Neil’s studio?

We use it when the occasion calls for it. Neil works with a variety of engineers, and some people--if they get an idea to use it, that's when it gets used. It's kind of like that.

Can you go through the general layout of the studio? The board, monitors, recording devices …

We've got an 8078 Neve console that's our main console. That gets used sometimes just in the way it was designed, with a programmer-monitor section. Sometimes it gets used strictly as a mixing situation, where we'll use the green board (610) and maybe a Neve BCM-10 and some outboard mic preamps, that kind of thing, and feed the tape machines that way. We record everything analog still. It goes to digital at the last possible moment. We've got some of the UA stuff, and we've got Millennia stuff, and some of John Hardy's mic preamps that we use outboard sometimes. Monitors, we have big two-way TAD monitors, both for stereo and 5.1. We're also currently using a small NS10 kind of monitor with PASS amps. Down in my facility we’re running SLS speakers with the ribbon tweeters and PASS amps.

I have a studio in Neil's old remote truck that I rebuilt about 15 years ago. It's strictly for doing tape restoration and analog-to-digital transfers. So it's all wired with the best cable. We paid a lot attention to the electrical system and the grounding, and power conditioning. It's really just to get it as simply and cleanly as possible from analog to digital.

Do you have a go-to signal chain for Neil's voice, or Neil's guitar? Or is it something you experiment with?

It changes all the time. It's not really experimentation, it's just what the situation requires. It depends on how he's recording, because Neil records live, essentially; it's a live performance. So depending on who he's playing with, where he's recording, and what he's recording, that dictates that.

Do you work in Pro Tools at all?

We run Pro Tools as a safety. Occasionally there'll be a fix or something done in Pro Tools that we'll fly back into the analog. But primarily we run the Pro Tools so that we have a safety without having to run a second analog multitrack, which we used to do. We also can set up our rough mixes from it, so we don't have to play the tapes over and over and over again.

It's so refreshing to hear somebody who doesn't rely solely on Pro Tools.

We're using a Sonic Solutions system for our mastering, and most of our DAW work. In fact, our mastering guy is just changing over at this point from the older Sonic HG to the Sonic soundBlade. Well, we don't generally mix multitrack from Pro Tools, from digital. There are times we’ll mix from digital--Neil's live recordings are done digitally. You just can't haul big analog multitracks around like that.

When we were over at the UA offices, you told me about mixing Harvest Moon on the UA green 610 board.

Yeah, I was premixing at the 8078 and Neil was set up right behind me, mixing, doing the final blends on the green board.

What is it you like about the green board?

It's just very musical sounding, and it's real warm. It sounds great. The EQs, while they're very limited EQs because they were designed way back when, still sound great. Occasionally we may have to add an EQ in or something to do some corrective work, but by and large--and it's a lot of fun, just having those big, rotary knobs.

Do you have any other favorite UA products?

I've got a card in my home studio, where I'm doing a little bit of mastering, just for friends. So I use it there a lot. And I've got one in my box here at work--a UAD-1 PCI/e card. I’m looking forward to setting up the UAD-2 on our new soundBlade mastering system.

I use the Neve compressor [33609] and EQs [1073, 1081]. I think the Fairchild is real cool. And the Precision Multiband Compressor, I'm a big fan of that. Particularly in mastering, there are a lot of times when you just need to boost a frequency or suck out a frequency, but you can't afford to suck it out all the time, you know? So I really like the dynamic compressor, particularly with things that have been mixed at home. [Laughs.] They come in, and they don't exactly sound necessarily well balanced, tonally.

What's next for Neil? Is there a new album, a new project? I haven't seen the film yet.

That’s his zero-emission automobile project? I just read about that in the paper this week. He’s modifying his old ’59 Lincoln. That's exciting.

You can go to the site, lincvolt.com, and learn all kinds of stuff about that. So he's spending a lot of time on that, but he's always got something going, he's always got music coming out … so we'll see.

It sounds like you have a really nice life.

Well, you gotta stay on your toes, that's for sure. [Laughs.]

It's such a struggle for some people in the music industry to be in the Bay Area.

That's really the truth, and when you figure that I've had this job for 18 years, and I have a wife, I have a family. Most times, I don't have to work on the weekend, and most times I leave around 5:30 or 6:00, and I'm home for dinner. It's pretty hard to complain. [Laughs.]

Learn how multi-platinum producer Louis Bell uses his Apollo Twin and UAD plug-ins to record and mix vocals for artists such as Post Malone, Camila Cabello, and DJ Snake.