Van Rivers (aka Henrik von Sivers) is a Swedish music producer and engineer based in New York City. His production and mix credits include Blonde Redhead, Fever Ray, Matthew Dear, Delorean, and remix credits with the likes of Massive Attack, Lykke Li, Twin Shadow and Bat For Lashes. Originally a techno producer, Rivers' deep connection to electronic music is fundamental to his distinctive sound, and in addition to studio work, Rivers’ CV also includes musical direction for the live shows of many of the projects he’s involved with.

In this Producer's Corner, he details how he used UAD plugins to produce and mix the song "Shape," the lead single from Glasser’s latest record, Interiors.

I started working with Glasser on her debut record, Ring, and did all the musical direction for her live show as well. With her second album, the mission was to create a sound that reflected the architectural themes and metaphors of the lyrics. We tried to create a sonic world where the rhythms, sounds, and instruments make you feel like you enter the space of a surreal dream.

Here is the full version of "Shape.” I think the video gives a visual representation of the sonic experience we were going for in a nice way.

The lead vocal needed a delicate quality, but it also needed to feel prominent and close to the listener. My trick was to use a combination of different compressors and EQ’s. The 1176 from the 1176 Classic Limiter Plug-In Collection in limiting mode makes the sound come forward and then the Teletronix® LA-2A Classic Leveler Collection in compression mode balances it out, simultaneously giving it a slightly denser feel which I really like.

“No other plug-ins surpass the sound quality UAD-2...”

Here is the vocal dry:

The Maag EQ4® EQ plug-in gives it that sweet sheen on top which also brings back some of the delicacy that can get lost while compressing. In addition to the lead vocal track, I added a parallel bus with some more aggressive compression and frequency shaping, the Pultec EQP-1 EQ from the Pultec Passive EQ Collection has such wonderful depth and musicality to it, I tend to use it a lot in my mixes.

Another element that I think makes up the sound of the song is the noise-like percussion sound that holds the beat together. I used a combo of filters and modulation to create movement and width.Here is the part dry:

And here it is with UAD processing: 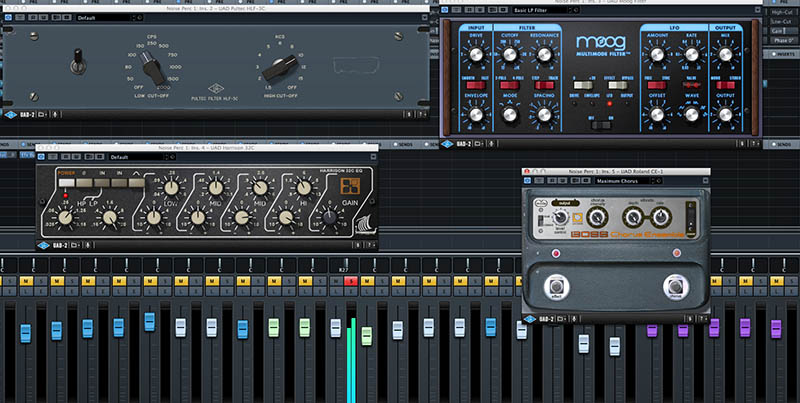 The Pultec HLF-3C plug-in from the Pultec Passive EQ Collection comes first, followed by some shaping with the Harrison® 32C / 32C SE Channel EQ. Third in line is the Moog® Multimode Filter plug-in — which has the cutoff lightly modulated by the LFO — followed by the Brigade Chorus Pedal, which gives some nice width and final grit to the sound.

The chorus of the track features a choral arrangement. The original panned vocals already had a nice sound and width to them.Here is the chorus dry: 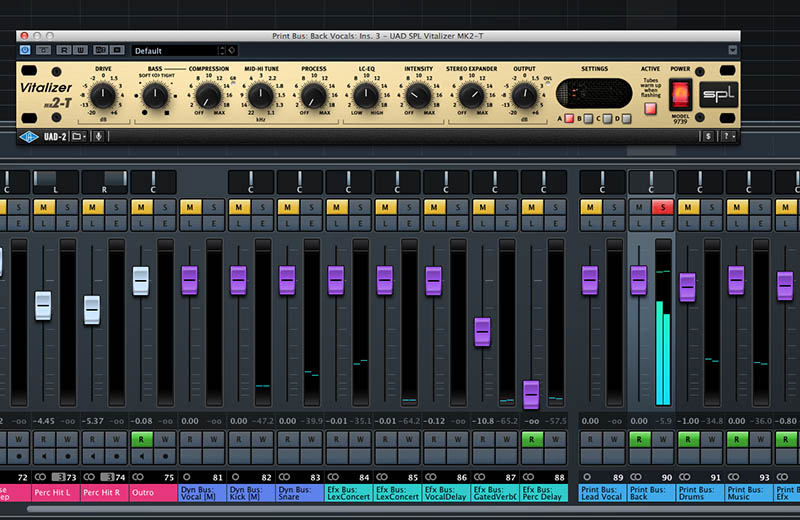 However, sometimes you just want to squeeze out that last bit of energy to make it sound even bigger. The SPL® Vitalizer MK2-T plug-in is great for just that purpose, especially on vocal busses.

These are just a few examples of how my favorite plug-ins might get used in a song. Listen to the whole Glasser album and you will hear many great examples of sounds that were processed with UAD software. I’m proud of how it turned out, and I think that many of the sonic achievements we made have the quality of the UAD Powered Plug-Ins to thank for it!