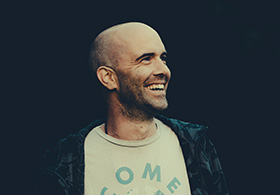 “I look at a mix like a rainbow,” says Cian Ciarán.
“When everything clicks into place and finds a home,
you have this complete, colorful creation.”

Songwriter, keyboardist, vocalist, and producer Cian Ciarán is one fifth and founding member of the legendary alternative rock/pop band Super Furry Animals. For 20 groundbreaking years, Super Furry Animals have been credited with re-establishing not just Welsh, but British music’s credibility.

As well as writing and recording under his own name, Ciarán has produced electronic music-orientated projects under the name Acid Casuals and remixed, guest recorded, and produced with artists including Paul McCartney, Mogwai, Manic Street Preachers, and Kaiser Chiefs.

Strangetown Records was set up as an outlet for members of Super Furry Animals’ own music. But lately, I have mixed and produced more and more bands, and Baby Queens are one of the latest to come through my door. At Strangetown Records, we have limited resources, so I mix everything in the box — a near impossible task in my opinion without UAD on board!

“Red Light” is one of the sparsest tracks I've worked on — which has its pros and cons — nothing to hide behind but a lot of space to occupy.

Here is the final mix of the track: 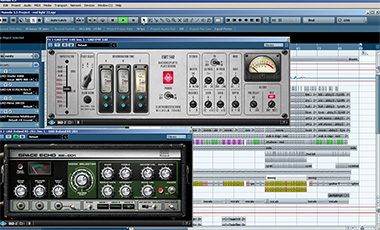 Often times reverb and echo are used in a subtle way to sit an instrument in a mix. However, a track like “Red Light” allowed me to use reverb and echo in a way where you can hear very clearly how they are used — almost as instruments in their own right.

I've owned many a hardware version of the Roland Space Echo, all of which are gone. So when UA released the Roland RE-201 Space Echo plug-in, I instantly fell in love again! It is integral to this track and it wouldn’t have nearly the same vibe without it. I also coupled the Space Echo with the EMT 140 Classic Plate Reverberator plug-in.

Here is the drum groove dry:

And here is the drum groove with the Space Echo and EMT 140:

Together, both plug-ins perform a dance, answering one another, which makes the drums drift effortlessly through the track, taking you on a dream-like journey. 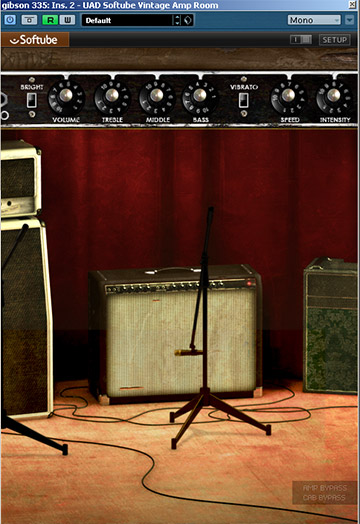 The guitar was recorded direct and UAD came to the rescue with the help of the Softube Vintage Amp Room plug-in. I love this plug in for the visual presentation alone! I opted for the “Fender”-like amp model.

And here is the guitar with the Softube Vintage Amp Room:

I got the clean, vibey tone I was looking for, and some cool tremolo to add a nice rippling texture as well.

With so much room to play with in the overall mix, the vocal could have been manipulated in various ways. Instead, I opted for a dryer sound, which I believe gives the vocal and the track a more intimate feel.

I used the Studer A800 Multi-Channel Tape Recorder plug-in as the first insert on the vocal chain as an EQ. It's such a versatile plug-in. I can use it to effect in different ways —overdrive signals, compression and saturation, or as an EQ for low-end warmth or high-frequency sparkle.

Here is the vocal dry:

You can hear how the Studer plug-in really opens up the sound and gives it room to breathe.

Producing Tycho from Studio to Stage