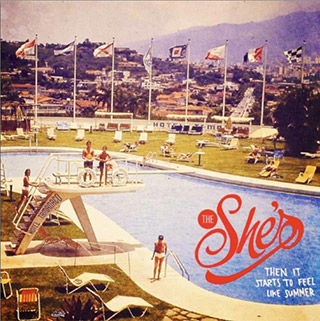 The SHE'S debut album was recorded and mixed
at Women's Audio Mission in San Francisco.

Terri Winston is a producer, engineer, songwriter, former major label recording artist, and the director of Women’s Audio Mission, a non-profit organization dedicated to the advancement of women in the recording arts.  She has shared the stage with such acts as PJ Harvey, The Pixies, Throwing Muses, Flaming Lips, Fugazi, Cake, and Third Eye Blind. As an award-winning songwriter, engineer, and producer, she has worked with Lenny Kaye of the Patti Smith Group, Greg Hawkes of The Cars, Barbara Manning, Vyvyan, Built for the Sea, and most recently Kronos Quartet and The SHE’S.

In this Producer’s Corner, Winston talks about how UAD Powered Plug-Ins played an important role in mixing The SHE's debut album, Then It Starts to Feel Like Summer. It was recorded and mixed at WAM’s studio in San Francisco, a studio run and staffed entirely by women, and mastered by Emily Lazar and Joe LaPorta at the Lodge.

I have been using UAD Powered Plug-Ins from the very beginning, which I guess is over a decade now. It all started when I didn’t have enough hardware 1176s and LA-2As at my disposal. The UAD plug-ins of the vintage units sound amazing and I still can’t believe how meticulously crafted they are. Even though we used a lot of outboard gear when mixing this record, including a pair of UA 1176s and an LA-22, we ended up using a considerable amount of UAD plug-ins as well. The SHE’S have a ton of vocal harmonies in their songs. UAD plug-ins allowed us to use multiple instances of plug-ins to dial up unique effects for each vocal and automate the processing, creating a distinct tone for each part of the song. The plug-ins we used the most were the Cambridge EQ, EMT® 140 Plate Reverb, 1176LN Limiting Amplifier, Pultec Pro EQ, and the Fairchild® 670 Compressor. The Cooper® Time Cube Mk II Delay was also very handy to spice up some of the vocals, and both the FATSO™ Jr./Sr. Tape Sim. & Compressor and Neve® 1073 Console EQ added some punch to the guitars.

We really enjoyed working on this record with The SHE’S. The title track, “Then It Starts to Feel Like Summer,” is one of my favorite tracks. It has great vocal harmonies and an epic guitar solo at the end.

Let’s take a listen to the song:

The difficulty in mixing so many harmonies was creating separation between the voices. Universal Audio had the perfect tools to remedy this problem. Hannah’s vocal was treated with a Fairchild 670 Compressor Plug-In using a time constant of 2. I always seem to use time constants 1 and 2 because they have faster release times. Sami’s vocal was treated with Teletronix® LA-3A Classic Audio Leveler Plug-In. We applied significant low and mid-range cuts to both vocals with the Cambridge EQ Plug-In. It really allowed their blend to be airy, yet still have separation and accent the articulation. 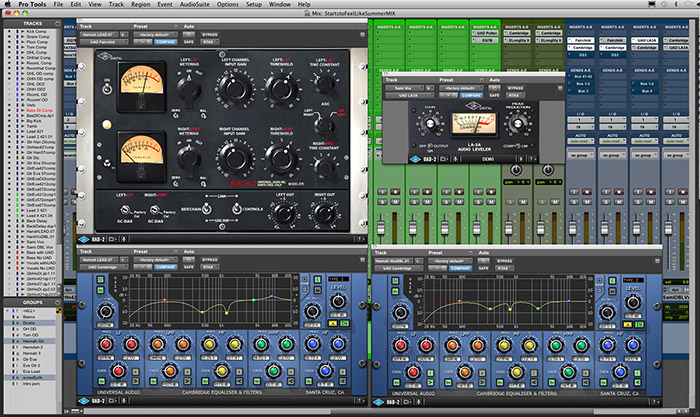 Here are the vocals before UAD Plug-Ins:

Here is the same vocal clip after UAD Plug-Ins:

The bass guitar track had nice low end, but it needed to be more aggressive to cut some of the sweetness of the song. Nothing beats the 1176 Classic Limiter plug-in for that. I used a slower attack to let some of the attack of the notes through and a release that followed the tempo of the song. I also used the Cambridge EQ to sculpt the sound of the bass with a mid-range cut and a slight boost in the low end at 1.5 kHz. I love the Cambridge EQ for its precision and ease. 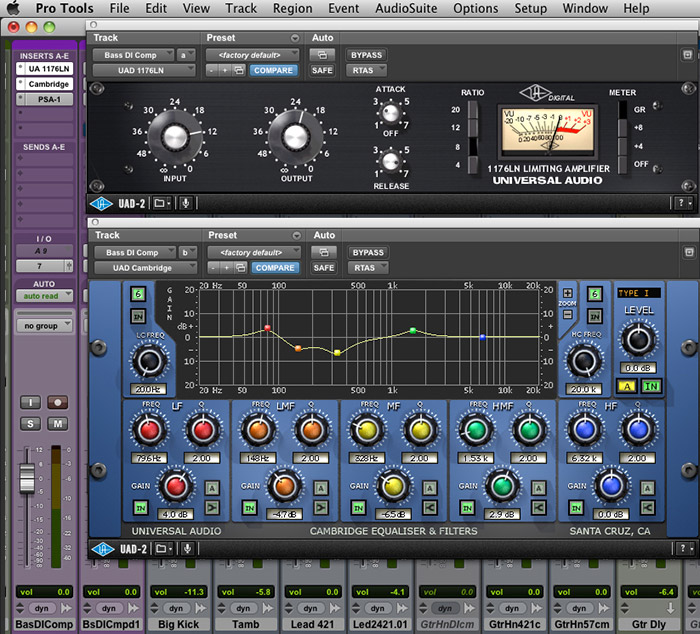 Let’s take a listen to the bass guitar before UAD plug-ins:

And here’s the result after UAD Plug-Ins:

The SHE’S are really into vintage sounds, and the FATSO Jr./Sr. Tape Sim. & Compressor Plug-In excels at creating this effect, especially with the Tranny setting on. The FATSO also added some punch to the guitar by bringing out the attack on the notes, making it sound gutsier. We used the Cambridge EQ again to scoop out some of the mids and the Neve Classic Console EQ Plug-In to add a vintage vibe and a little sparkle.

UAD plug-in settings for the guitar.

Here is the guitar without UAD plug-ins:

And here’s the result after UAD Plug-Ins:

Adding Dimension to the Background Vocal

Here’s an example of how the EMT 140 Plate Reverb Plug-In was used in this song. It is such a sweet reverb. The ability to have multiple instances of this plate in this song really added something special to the track.

Here’s the original background vocal without the EMT 140:

And here’s the background vocal with the EMT 140 plug-in:

Engineer/producer Michael Ilbert's has crafted records by the Hives, Supergrass, and In Flames, Taylor Swift and many more.

Tips for Prepping Your Mixing Session

Here's some preparation that needs to be done before you start your mixing session.