Ariel Borujow is chief engineer at famed New York studio Stadium Red, where he spends most his time crafting mixes for artists ranging from Mac Miller to Madonna, as well as an array of emerging independent clients. His early career started at P.Diddy’s Daddy’s House Recording, and The Cutting Room. There he had a chance to study his craft with some of music’s top artists and producers. Today he spends most of his time in his C4 mix room within the Stadium Red compound alongside resident producers Just Blaze and Omen, and resident mastering engineer Ricardo Gutierrez. His main rig houses a UAD QUAD DSP Accelerator card, his go-to weapon for all mixes.

Recently I had the privilege of mixing for EMI recording artist Chiddy Bang on their debut album Breakfast. The song I'll talk about here is their second single titled "Mind Your Manners.” One of the things I admire about this group is their ability to fuse other forms of music with hip hop. This one is no different, featuring Swedish duo Iconic Pop. Producer Xaphoon Jones, who in my eyes is one of the most talented emerging producers, really incorporated an array of influences to create one of the more standout tracks of their album.

To get some of that nice low end on this mix, I had to pull out some parallel compression tricks. By splitting the kicks into 3 frequencies I was able to hone in and really carve the low end easier to sit right in both my NS-10 monitors and mains. It also makes it easier to work on the bass so it doesn't clash frequency-wise with the kick.

Here’s the bass and drums before these UAD plug-ins:

And here’s the result after UAD plug-ins:

The way that I tackled the acoustic and electric guitars was very simple, even though they played a very important role in the overall song. Whenever I need a simple and straightforward EQ that also sounds amazing, I reach for the Cambridge EQ. In “Mind Your Manners,” there were two pairs of acoustic guitars and one pair of electric guitar broken into different sections. During the intro and breakdowns, the acoustic guitars needed a bit of fattening. On one, I boosted 4 dB at 81.7 Hz with a slight cut at 980 Hz to tame some of the strumming. The second I boosted 3.7 dB at 308 Hz.

On the electric guitars that double the acoustic line on the break, I used the SSL E Series channel strip, boosting about 5 dB at 1.5 Hz on both. It gave a nice bite without being overly aggressive and, combined with the compressor, helped it pop a bit in the mix. SSL has always been very unique in how their compressors react and UAD really nailed it with their versions of both the E Series Channel Strip and G Series Bus Compressor.

To add the finishing touches and make the guitars sit in the mix, I added a touch of the EMT 140 Plate Reverb plug-in, which I have used on every mix since getting on the UAD wagon. I cut some of the highs on the reverb so the strings on the guitar can cut through without sounding washy on the high end. On the acoustic guitar, I generally use the Roland Dimension D plug-in on mixes. No different on this one. Setting 4 just appealed to me on this so I settled on that.

Here are the guitars without UAD plug-ins:

And now, with UAD:

I actually attacked Chiddy's lead vocals in a very simple and straightforward manner. When I received the vocal, it was a bit dark. To tackle this, I went right for my trusty Cambridge EQ and started getting rid of the "bad" frequencies. One thing I forgot to mention about the Cambridge is how little processing it uses. This makes it useful when reaching for the more powerful plugs like the Manley® Massive Passive EQ Plug-In and such. 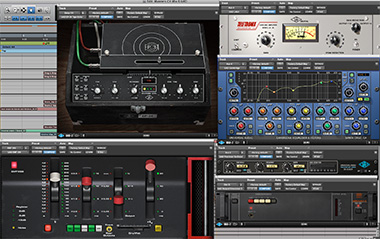 Once I got rid of those frequencies, I boosted around 6k for some "bite" and 13K for air —simple enough. For compression, I reached for the Teletronix® LA-2A Classic Leveling Amplifier Plug-In. It’s smooth in how it reacts, and Chiddy's voice is aggressive, so it complimented it well.

Finally, Precision De-Esser Plug-In was added to the chain, just to tame the “ess.” Not much science there. For effects, I reached for the EMT® 250  Electronic Reverb. When using reverb, I always tweak the parameters a bit to get a distinct sound on every mix. I generally put a touch of 1/8 note delay on lead vocals to make it "bounce" a bit, using the EP-34 Tape Echo Plug-In. And finally, I used a touch of the Roland® Dimension D Plug-In on the acoustics for effect purposes.

Here is the lead vocal before treating it without UAD plug-ins:

And finally, here is the lead vocal with UAD plug-ins:

Well, there you have it folks. "Mind Your Manners" was an exciting song to mix and working with both Xaphoon Jones and Chiddy was an absolute pleasure. I am glad Universal Audio allowed me to share some of my techniques with you guys. Also, a big thank you to the Chiddy Bang crew for giving me the blessings to share this with you. Their debut album, Breakfast, has been tearing up the charts and "Mind Your Manners" is just a small piece of an awesome puzzle.

In this UAD Tones & Techniques video, learn how to record and mix a hip-hop track using Apollo x4.